By JAKE WHITMAN and JEREMY HUBBARD

If it seems like there’s only garbage on TV lat 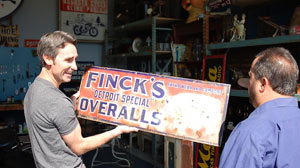 ely, there’s a good reason. “Trash” has become cable television’s treasure. In April the History Channel had its highest ratings ever, bolstered bya runaway hit, now among the top 10 shows on cable.

“American Pickers” is about two guys crisscrossing the Midwest’s back roads, picking through dusty old barns and garages for antiques and collectibles.

In a matter of months, stars Mike Wolfe and Frank Fritz have turned a word once reserved for trash collectors and hoarders into a television phenomenon.

“American Pickers” debuted in January, and airs Monday nights on the History Channel along with another huge hit featuring forgotten treasures. “Pawn Stars” is based on the owners of a Las Vegas hock shop, who haggle and deal with customers hoping to make a buck in sin city.

“American Pickers” averaged 3.8 million total viewers in its first season of ten episodes. Not bad for an idea Wolfe says he tried to pitch for four years, shooting homemade episodes with Fritz using… READ THE ARTICLE IN ITS ENTIRETY HERE.