American Pickers: Behind the Scenes 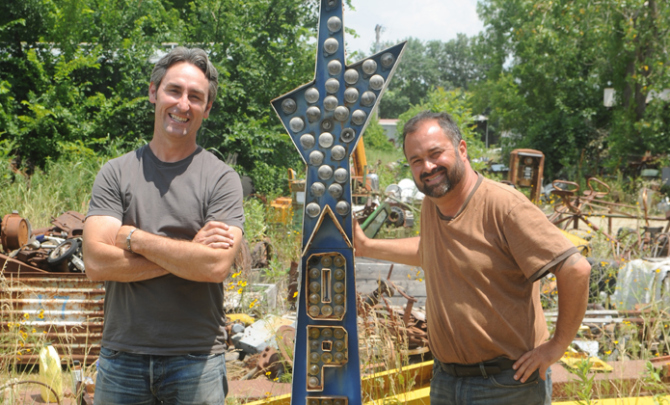 Mike Wolfe follows his flashlight past a 1923 Avery tractor and a row of rusty gasoline pumps crammed inside of a metal storage building in Parsons, Kan. Half-hidden in a corner is a 6-foot-tall “OPEN” sign with an arrow that lights up.

“Rick, what do you have to have for this?” Wolfe asks owner Rick Trotnic, 52, a collector of automotive artifacts and antique farm machinery.

Trotnic wants $600, but Wolfe offers $500. After some haggling, the two strike a deal for $525. Wolfe wriggles the giant arrow from its dusty resting place as he and co-star Frank Fritz score another purchase on the “American Pickers” television show.

Since the program premiered in 2010, Wolfe and Fritz, both 48, have scavenged America’s back roads in more than 40 states in search of “rusty gold.” That’s what they call the vintage bicycles, motorcycles, farm machinery, advertising signs and other historical gems they unearth from cluttered barns and sheds, junkyards and brush piles.

“People feel intimidated by the word ‘antique,’’’ says Wolfe, who lives with his wife, Jodi, and toddler daughter, Charlie, in Leiper’s Fork, Tenn. “This is blue-collar, digging in the dirt. We celebrate the imperfect— the sun-baked, rusty and dirty.”

READ THE ARTICLE IN ITS ENTIRETY HERE.