Today, it’s easy to pile into the car and make a Target run, but for the folks who still live way out in the sticks, it’s an entire day’s commitment. Back before cars, people had to walk or ride a horse to the town’s general store for supplies.

These little stores were responsible for providing food and goods to their neighbors during WWII and the Great Depression and many still do today!  If you want to get out and see what America was living like before the tech boom and Amazon Prime, grab your travel buds and take our one-of-a-kind 28-mile backroad general store tour through southern Tennessee.

You’ll start in Leiper’s Fork and end on the famous Natchez Trace Parkway where you can choose the rest of your adventure.

We’re gonna take you on a country ride through bliss, honey, and bologna sandwiches starting at the original Puckett’s.

Morning, noon, or night, this place smells incredible. The smoke from the fire pit out front follows you inside where waitresses have been dancing around the country kitchen since 6:00AM cracking eggs, grilling bacon, and buttering biscuits. This general store/small restaurant/music venue has been a sacred space in the community since the 1950s when the Puckett family first opened shop as a one-stop general store.

Each of the six previous owners has contributed to Puckett’s legacy in a special way. Inspired by the history and the respect the Leiper’s Fork community had for the place, a young music industry professional named Rob Robinson and his wife Shanel bought the place in 2008, with a commitment to keep the community tradition of Puckett’s unchanged. That included keeping the independently owned business’s grocery shelves stocked, the grill hot, and the music flowing as had been established 12 years before by the previous owner, Andy Marshall.

It was Andy’s vision to pull families off their porches and couches and into the store to visit with each other, enjoy a home-cooked meal, and hear good music.  Rob and Shanel couldn’t agree more.

As it stands today, you can still stop in and pick up some essentials like bread, paper towels, and milk. The Puckett’s crew has even been known to sell you the eggs from their prep kitchen if you need them!  All the recipes come from the Robinson family cookbook and go straight to your plate. We’re talking hoe cakes, chess pie, and the best fried chicken of your life.

Neighbors often ride their bikes to the store for a meal, to enjoy a fire, and to shoot the breeze. It’s very common for these neighbors to be Kid Rock, Wynnona Judd, Justin Timberlake, and Robert Plant,  who came in once and wrote ” you need coolin’ ” on the busted cooler. (Which you’ll appreciate if you know the Led Zeppelin tune “Whole Lotta Love”.)

Settle your coffee order on the way out the door then head to the next stop.

Follow the road out of Leiper’s Fork for about eight minutes, past rolling farmland and grazing buffalo and you’ll find yourself at the crossroads of Bending Chestnut Road and Greenbrier Road.  There you’ll find Fox’s Grocery and inside waiting to greet you will be Jewel Anderson, from the third generation of the family that established the store and has run it for nearly 100 years.

After a time in the service, Jewel’s grandfather opened the grocery in 1921.  She was 5 when she started there, responsible for stocking the shelves, sorting glass bottles, and sweeping the floors. Almost 60 years later, just after her much-beloved grandfather passed away, Jewel quit her teaching job and moved back into her childhood home, just next door, so she could keep the flame of the family business burning.

She’ll tell you stories about how her grandfather had a way of making the store a social hub, and how he loved to crank up the radio and have folks gather around to listen to the Grand Ole Opry together. After a heart attack weakened him, the family bought him a rocking chair and installed a handrail for him so he could still greet his customers, who just as often as not, would sit down and listen while he shared the Bible.

Though he was buried in 1975, his chair, Bible, and handrail still have a place of honor in the store, just under his portrait hanging on the wall.

In its heyday, folks would arrive by horse and buggy for feed, hardware, penny candy, and flour sacks to make dresses.  Just above the register is a spool of string that still dangles to tie up bags of beans and sugar. You’ll find just about anything here — from fabric softener to Daisy BBs to soda and shoelaces.

Jewel is famous for her $3 thick-cut bologna sandwiches on traditional white bread with a generous smear of mayo and a cold Kraft single. This is a good place to drop the tailgate or sit on the porch and enjoy the simplicity surrounding you. Fox’s also offers 100% pure gas! At $2.63 a gallon, this is a smart place to fill up before you get back on the road.

Just past Leiper’s Fork is Boston, Tennessee and that’s your next stop. Davis General Merchandise was built in 1929 after the railroad track that ran out front was torn up and turned into a road.  It’s been the community’s general store for almost 90 years and the Davis family bought it about a half-century ago.

Today it is run by the brother and sister duo who grew up in the store, Joey and Patsy Davis. Joey is the businessman and Patsy makes the deli fare, including homemade chicken salad, turkey, and you guessed it, bologna sandwiches.  Feed for horses, cows, and chickens is sold out back and gas is available out front. And in season, you can pick up locally-produced honey and home-grown tomatoes.

The decor reminds you of walking into someone’s home. To enter, you cross a large covered front porch, then go through double screen doors and make your way to the back and the wood-burning stove with a tea kettle on it. The rocking chairs are draped with sweaters and floral cushions, old photos of mom and dad sit pretty in frames, a deer mount keeps an eye over the place, and two old men at the kitchen table are talking small town life.

Before you leave, challenge your friend to a game of checkers on the pickle barrel. Loser buys a plate of meat and three at the next stop on the general store tour, which is perfect because the place you’re about to go is known for its down-home cooking.

After leaving Davis, you’ll drive about 12 miles through two-lane back roads on the Old Tennessee Trail ‘til you arrive at the red-roofed treasure known as Netts, in Bethel, Tennessee.

This is the definition of picturesque. There’s a stray white cat hiding behind an old pickup truck, a church to the left, and a steady current in Leiper’s Creek to the right. The field behind the store is buzzing with noisy crickets looking to add some appropriate country ambiance to your general store tour experience. Walk up the steps to the front porch and you’ll see a flyer selling cows and fresh eggs.

If you were to come in here on a weekend you’d have to wait for a table because if there’s one thing Nett is good at, it’s home cooking.

On Sundays, Nett serves traditional southern meat and three lunch, cafeteria-style, from 11:00 AM-3:00PM for about $7. Fried chicken, catfish, green beans, and creamed potatoes are always on the menu and are made with love from her personal cookbook. If you’re up for it, Fridays and Saturdays are reserved for frog’s legs dinners.  Ask Nett where the legs come from and she’ll just smile and wink and say, “The same place we get everything else.”

Nett is the sixth owner of the store, open since 1910.  What began 12 years ago as a crazy business venture for Nett, her husband, and their daughter, has turned into a new tradition for the community. Celebrities drop in for her cooking too — Clay Walker, Hank Williams Jr, and Billy Currington. And when Dolly pops in, she always orders — you guessed it — a bologna sandwich.

People come from miles to hear the deer head on the wall wish them happy birthday. Look closely and you’ll see Nett with a microphone in her pocket controlling the interactive deer mount. (She likes to make the deer sing and talk back to patrons while they enjoy their meal.)

On your way out the door to the final stop on the tour, grab a few scoops of shelled Virginia peanuts out of the yellow sack up front and pay what they weigh. Be sure if that deer says “goodbye” to you that you say it back!

The last spot on our tour is not only the oldest but also the winner of the most unique decor. Located four minutes down the road from Netts, in Fly, Tennessee, Fly’s is anything but plain, just like its fifth-generation owner, Wilson Fly.

While he may hide behind a beard and seem quiet, don’t be deterred! He is always excited to talk to visitors, which is a good thing because they stream into the store all day long.  Neighbors (delete comma)  like Miranda Lambert come in to buy odds and ends, grandparents come in with grandkids to buy candy, and cyclists are always pulling off the road to grab a bite before they continue on their ride.

Fly’s has been accommodating the community since the family started the general store in 1890, around the same time as the Panic of 1893, the presidency of Benjamin Harris, and the creation of the Tootsie Roll.

The family also prides themselves on having contributed to the local happiness and well-being by selling 25-pound bags of sugar to moonshiners during Prohibition. The history vibe inside this place is reminiscent of your grandpa’s catch-all barn. Inside, treasures like an old hornet’s nest, deer antlers, cans of motor oil, old Saltines tins, Argo laundry starch, and tools are plastered from floor to ceiling. In the front window, you’ll find the leg braces Wilson wore after he was diagnosed with polio when he was 18 months old.

It’s impossible not to check out Wilson’s handmade birdhouses, furniture, and other wood projects in the yard on your way out of the store. On the back of each of his pieces, he burns the Native American sign for the dragonfly as a trademark and homage to his ancestors who believe that the dragonfly is a symbol for good luck.

If you’re still hungry after all that traveling before you head out you can ask Wilson to make you just one more bologna sandwich for the road . . .

At this point, you are just a few miles away from the famous Natchez Trace Parkway. Follow it 440 miles south and you’ll find yourself in Natchez, Mississippi where more adventures are sure to find you. When out exploring on two lanes always remain curious, come hungry, and pay a visit to these backroad businesses that have supported and loved their neighbors for all these years.

Our favorite Two Lanes by Mike Wolfe saying is printed in off-white and dark green on a super soft, heather olive green tee. Made in the USA. SHOP NOW! 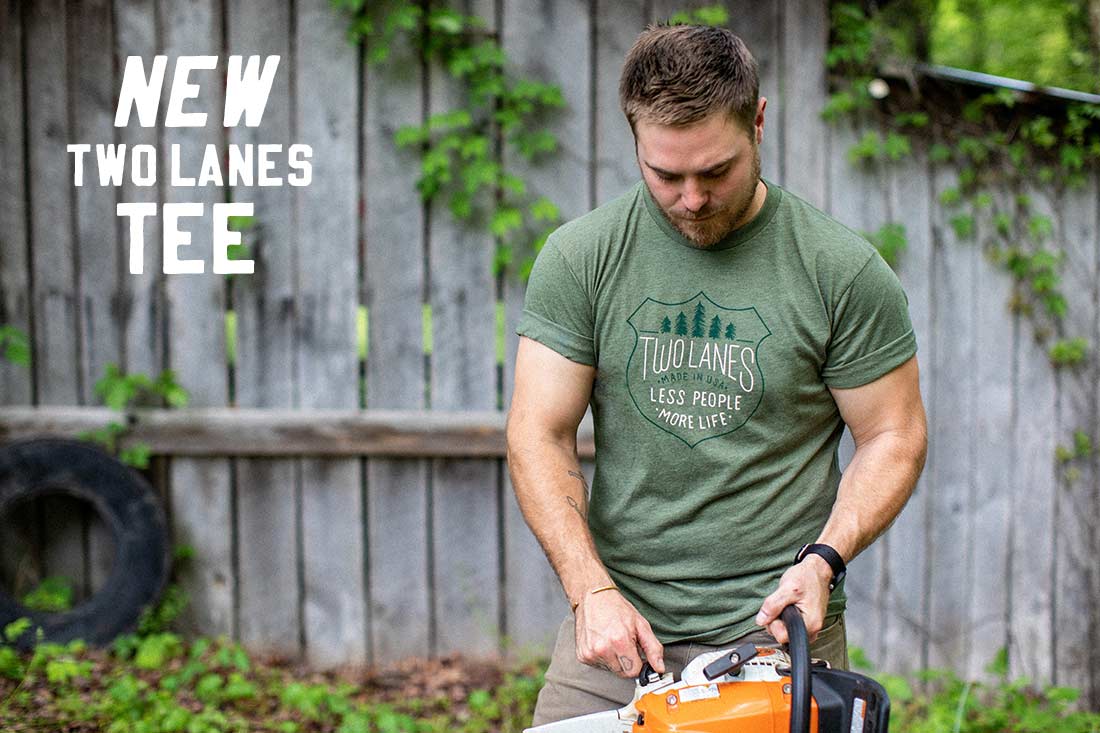