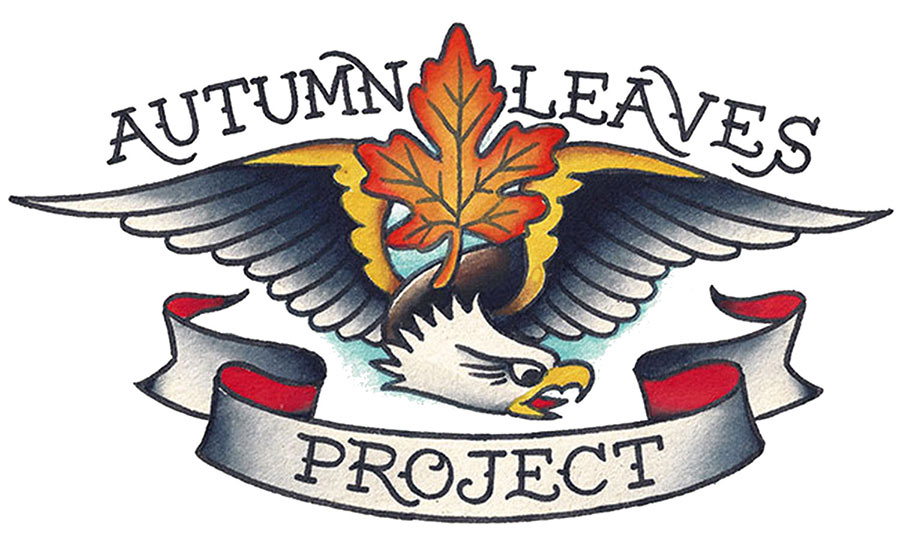 It’s no secret that Mike has a thing for motorcycles — especially the antique ones. That same shared appreciation brought him and musician/producer, Butch Walker, together six years ago, taking rides down the historic highways and no-name back roads of America.

Butch inherited his love of vintage from his dad, Butch Walker Sr., an antique collector who matched Mike’s passion for history.

“Knowing his dad and I had a lot in common,” says Mike “Butch arranged us to have dinner together. We spent the evening swapping stories of our favorite finds and the ones we still hoped to discover. Right away, I felt connected to him.”

If it was that easy to connect with Butch Sr. over one dinner, you can imagine the unbreakable bond developed over the years between him and his son. Especially after all those miles logged together on a tour bus with fast food, stinky socks, and zero personal space.

Back when Butch just started playing shows, Butch Sr. would travel with the band to their gigs and even run their merch table. He was very popular with the fans — a real working groupie.

“Those late nights spent together sitting on a hotel floor counting merch money and talking about the show that night over cheap whiskey, are some of my favorite memories with him.”

As Butch’s career grew to nationwide tours playing sold-out shows for rock-loving fans, his favorite part of every show was busting out his flip phone and calling his dad from the stage.

“No matter where in the country we were playing, I would call and wake him up so he could talk to the crowd. I’d say ‘Dad, whatcha doing, you awake?’ then hold the microphone up the speaker and he’d always answer with, ‘I’m mowing the grass! What do you think I’m doing?’ Every crowd I played forgot to have that moment with him and me. It was so special every time.”

It’s really something special to see a man pause in the middle of a high energy rock show amongst leather, tattoos, and string-breaking guitar solos, to make a sentimental call to his dad. Here’s what that looks like.

It was a complete shock in 2013 when Butch’s dad was diagnosed with pancreatic cancer and was immediately hospitalized. After only being diagnosed 24 hours prior, 71-year-old Butch Sr. lost his battle without even a chance to fight.

“I held his hand, closed my eyes, he closed his, and he was gone,” says Butch. “That’s the thing about pancreatic cancer. It doesn’t give you a chance to reconcile with it, it doesn’t let you make plans, or let you prepare for the ending. It sneaks up on you and gives you no warning until it’s too late. It’s the most reclusive and elusive killer in this inhuman family of diseases.”

After the sudden passing of his dad, Butch decided he wanted to help others battling pancreatic cancer. Named after his dad’s favorite season in the north Georgia mountains, he founded The Autumn Leaves Project. A free resource for families and individuals living with this illness to help alleviate the financial stress of the day-to-day fight with cancer. They believe it’s the little things like gas cards, nutritional meals, and personal care that make a world of difference during that difficult time.

“It can be financially crippling when a two-person income home becomes one after a diagnosis,” says Butch. “No one should have to make a decision about whether to feed their families or put gas in the car to go to an appointment. We exist to eliminate that barrier.”

Earlier this year,  Johnny Depp, Alice Cooper, Brad Whitford, Joe Perry, and more came together thanks to Nathan Fawley of Duesenberg Guitars for the Annual Imperial Ball Charity Concert where Autumn Leaves was chosen to be one of the beneficiaries to receive a portion of the ticket sales. Most recently, Butch played a sold-out benefit show for the Autumn Leaves Project in Topanga Canyon, CA inside a Shakespeare theater in the middle of the woods. 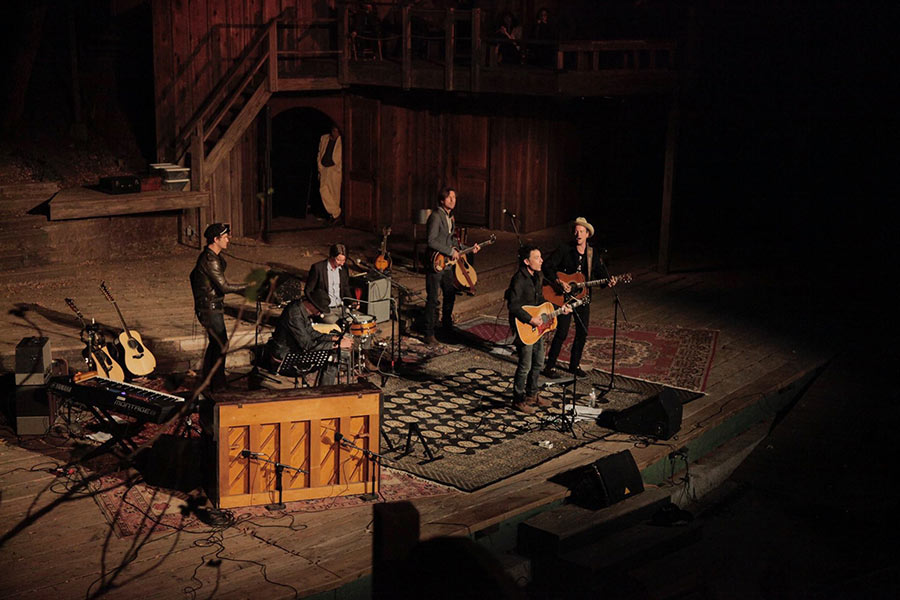 “Friends came out to perform late into the night and kept the energy up by snacking on dad’s cherished pickled green tomatoes,” shares Butch. “We had a beautiful experience out there. It was incredible to see people gravitate towards something so negative in such a positive light. I could feel dad there making sure everything went off without a hitch.”

Thanks to the passion of all involved, Autumn Leaves raised double what they expected that night.

Not only did Butch Sr. support his own family, he perpetually gave back and looked out for all those around him. Now, Autumn Leaves partners with like-minded organizations, some with personal experiences driving them, to amplify their outreach for aid as another way to honor his generous heart.

The biker and music communities have given an outpour of support through fundraisers and donations. The founders of Rock and Rides for the Cure based out of Yardley, Pennsylvania ride to help raise awareness about pancreatic cancer. After losing a brother to the disease and seeing how it can affect a family financially, they pick a patient to receive all their proceeds for the year. 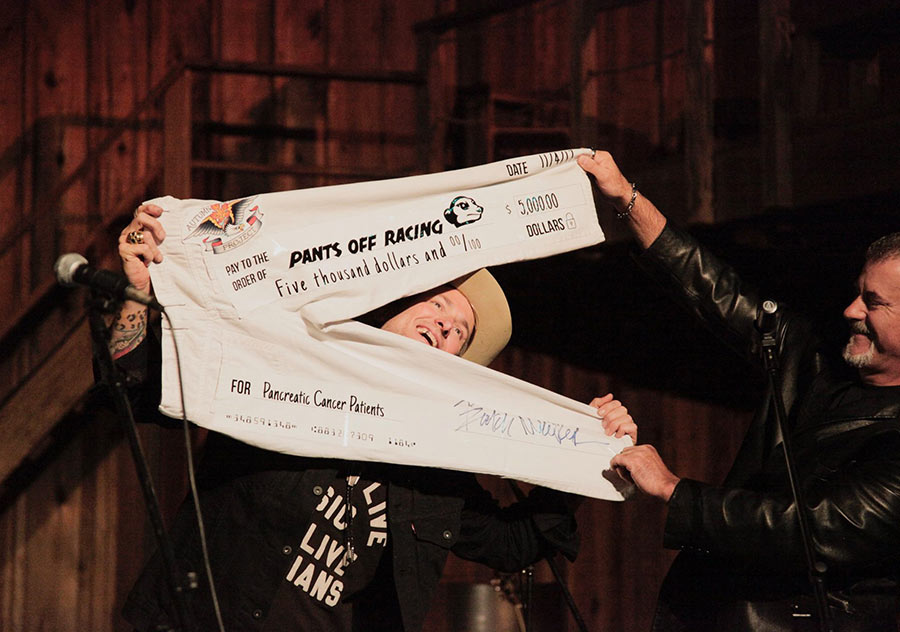 Pants Off Racing is another organization Autumn Leaves partners with. These high energy, sports enthusiasts connect patients with resources to meet various needs and really form personal relationships with patients. They’ve even been known to deliver Christmas trees!

Donating to Autumn Leaves means directly providing relief to those fighting against this dreadful disease. All proceeds go right into the pockets of patients and their families who need help getting through the daily struggle.

“It feels good to make a difference on an independent level,” says Butch. “When you focus on the humanity of it and its immediate impact, instead of strictly financial, you feel good about contributing.”

Because Mike and Butch have been friends for a long time, this holiday season Mike wants to help give back to the cause inspired by a man he greatly respected.

In his honor, to help raise funding for this incredible organization, Mike wanted to give you all the opportunity to win a piece of American Pickers history from the very first season of the show: The Piggly Wiggly head. The winner was announced on January 4th, 2018 on Mike’s Facebook page.

Watch Mike find the Piggly Wiggly head in Season One in the clip below!

Cheers to you! Now this is a koozie for the ultimate picker! Inspired by vintage oil cans, this full-color wrap, foam koozie has the right amount of patina and a secret message on the bottom. SHOP NOW! 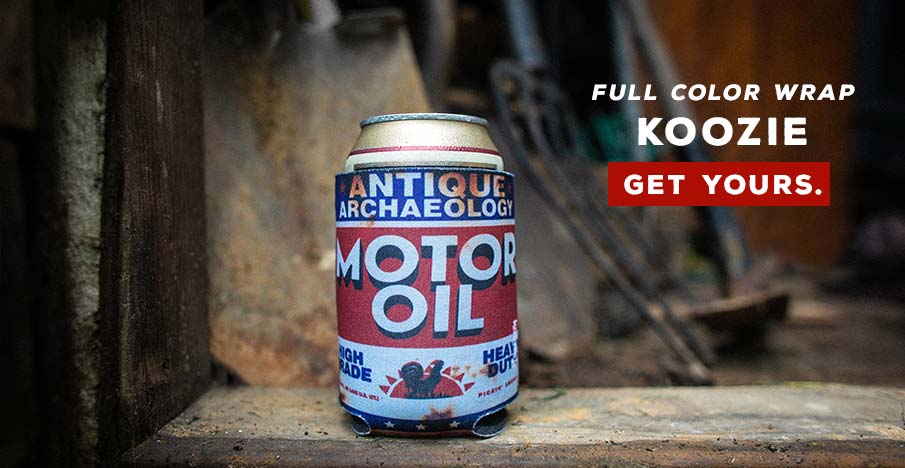