The city that the country forgot is preparing its comeback.

Mike stumbled upon Cairo by accident one night while driving around the southernmost tip of Illinois. Ever the curious person, he parked his car on Main Street and began looking around. On either side of him were decaying sidewalks, crumbling buildings, and sinkholes. No lights or inhabitants in sight. He had found an actual ghost town.

Cairo, (pronounced by locals as “we don’t care-o”) is located at the junction of the Mississippi and Ohio Rivers. Surrounded by water, Cairo easily became the jumping-off point for African Americans fleeing the Jim Crow laws of the south. With the mixing of races, the town quickly became a house divided.

Segregation in Cairo was anything but peaceful in the 1960s. As a type of protection service, the white community created the White Hats, while blacks retaliated with the Cairo United Front. When the two collided, businesses turned to ash and brawls broke out in the streets. Things were getting so bad, in fact, that the governor of Illinois had to dispatch 11 companies of the state militia to Cairo to restore order. After the flood in the summer of 2011, many residents fled and left Cairo abandoned. Boards went up and the city fell silent.

So, how is it that a city situated at the union of two of the largest rivers in North America is not one of the largest cities in the country?  A city whose riverside set up is similar to Pittsburgh should have had matched success. With the town’s darker history behind it, now is the time for Cairo’s second chance.

Cairo’s location is a city planner’s daydream. Two of the busiest and beautiful rivers in the country on either side of you begging to have boardwalks and marinas built over them. In its prime, Cairo was called, “The Gateway of the South” because of its river traffic during the 18th and 19th centuries. We say it’s time to give the steel bridges a break and start a trend with water travel again.

The people that live there have passion

The 2,800 residents that remain are all those who stayed after the summer flood of 2011. Can you imagine the sort of passion those citizens have for their town that they’d rather stay than to leave? It’s like they see the diamond underneath as they clean up their city, like when citizens collect bricks from fallen buildings to build new ones and when Willie Woods renovates a charming, Victorian-style home from the 1800s. Shemwell’s has been serving up BBQ in Cairo since the ’60s and is a place to find locals chatting about the good old days.  Cairo residents also established The Cairo Economic Development committee to address city news and to highlight the city’s untapped infrastructure and geographical position. Go Team Cairo!

Bonus Fact: A documentary was filmed in Cairo called, “Between Two Rivers.” It won ten awards including “Best Film” and where locals share history, loss, and promise of the city.

The architecture is already there

We’re talking original late 1800’s early 1900’s buildings. Brick buildings with big windows. We’re talking marquee signs over at the 106-year-old Gem Theatre and amazing Wrigley’s Spearmint gum and Coca-Cola ghost graffiti. Imagine what it would be like to pry off the boards from custom arched windows of the Famous building, remove the weeds from the base of the old hospital, or slap a fresh coat of paint on the walls of the W.T. Wall & Company Big Department Store. The foundation is laid, and it’s up to investors to pick up the hammer. Cairo’s mayor, Tyrone Coleman, has helped earn the city grants to clean up the area and businesses are looking to open doors. The building selection is quite impressive.

There are a lot of miles left on the tires of Cairo. This underdog is in motion to restore its former glory days and entertain folks once again. Here’s to Cairo, the city of hope and possibilities.

What future do you see for a town, like Cairo, looking to move forward and rebuild? Let’s start a conversation in the comments below.

Our best-selling license plate is back with a whole new look! Represent your picker pride on your vehicle or in your man cave with this custom license plate. SHOP NOW! 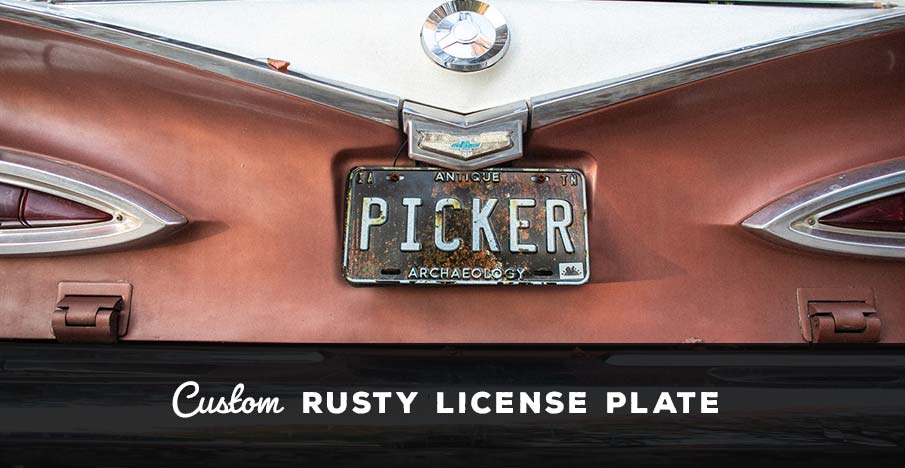