Catie Curtis’s most unforgettable childhood memory was exploring the Saco, Maine dump with her father, Phil Curtis, during the 1970s. To anyone else, this sounds more like punishment than paradise, but from her perspective, it was the greatest treasure hunt ever.

Show of hands: How many other picker-raised children are out there?

“We’d take regular trips to the town dump not because we were poor, but because dad appreciated the value of things and encouraged us to do the same,” says Catie. “He created the most magical childhood for our family, using discarded junk and its unique history as his props. Dad hated seeing things that have a certain charm, personality, or history thrown away.” (Reminds us of the story of how Mike used to dig in the trash as a kid.)

Nothing about that remembrance has changed for Phil, now 79. Seven days a week you can find him in his flannel and jeans, cruising around town, headed to an auction or a sale, looking for something that captures his attention. It could be anything from a piece of art to a gym floor (and we’ll get that in just a minute). His salvage reputation put him on the fast track to being the local catch-all of the town, and it became common knowledge in Saco that whatever you needed, you could find it in Phil’s place. 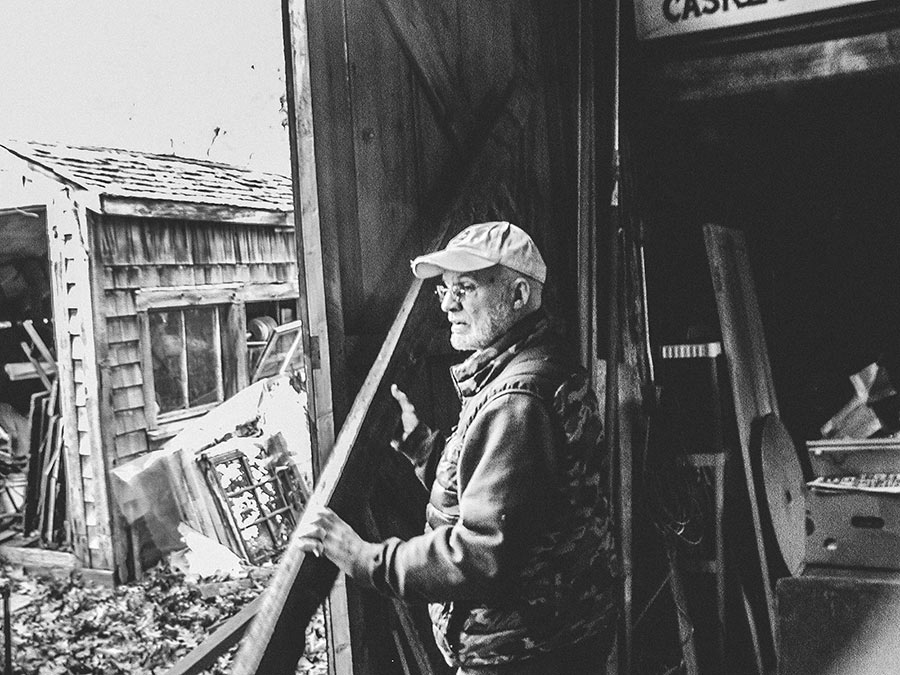 Phil would never have guessed that Catie would grow up to be a musician and that her best-known and most-loved song, Dad’s Yard, would be inspired by those childhood adventures in the town dump and her treasure hunting days sifting through piles in her father’s backyard.

The first time she ever performed Dad’s Yard was at Phil’s retirement party after more than 30 years as a high school math teacher. Needless to say, the entire room connected to the song because they too knew the humor and truth behind its lyrics.

“I remember so clearly singing it at the party,” says Catie, “and the way I felt looking at him after all those years spent spelunking through history with him. That song was the beginning of my career. I’ve toured for 35 years and Dad’s Yard is still the most requested song. I know people connect with it so strongly because they’ll come up to me and say how the song reminds them of their father, husband, even themselves. It hits a chord with people.”

“I remember sitting there with tears of humor and honor,” says Phil. “I guess I do have more apple ladders and antique hardware than the average guy.”

Ask Phil how he became a picker and he’ll tell you that while he was always a curious child, his appreciation for “junk” came shortly after marrying his college sweetheart, Catharine.

“When we bought our first apartment, the only thing we could afford to decorate it with was antique furniture,” he recounts. “During that time, I met a few collectors who taught me to appreciate the dovetailing and the marks under the drawers. I began thinking about all the other ways we could furnish a home for ourselves through salvaged and unique pieces and from then on, I was hooked for life. Bless my wife– she never fought me on it during the 56 years we had together.”

Over the years Phil built a reputation in the community for being able to match the person with the pick. His collection is well stocked with pieces that have a story.  All you gotta do is take a walk through his backyard and his barn and then take a few minutes to tell him yours. 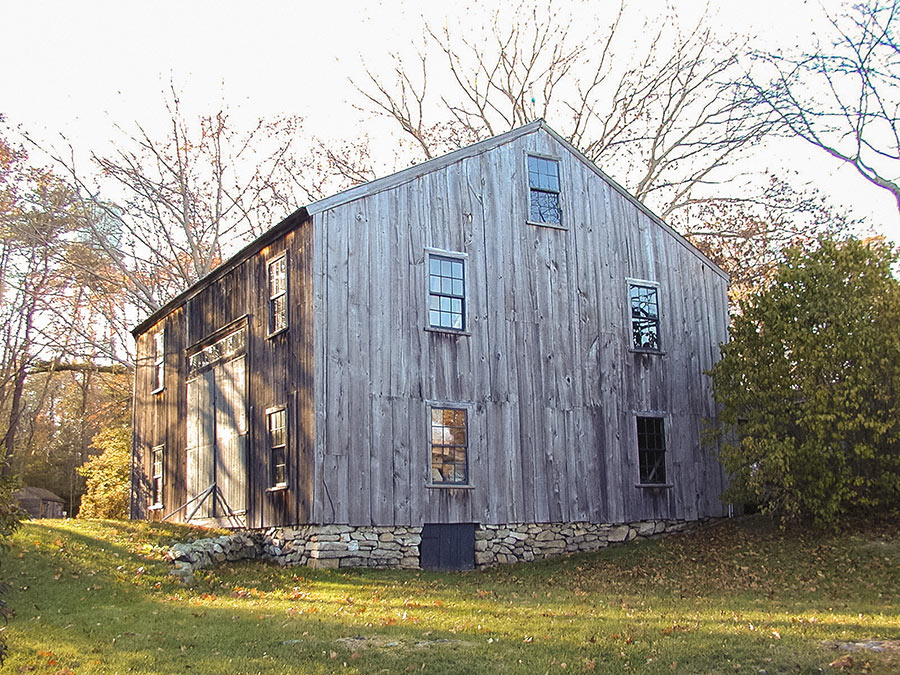 And speaking of barns, even his barn was a pick!  Found in Woodstock, Maine, it belonged to a casket manufacturer who was about to level it. Phil rescued the barn and transferred it piece by piece 70 miles south to Saco where it now lives in his backyard, filled to the gills with treasures.

Inside are two floors of just about anything you can think up. During Phil’s early days as a high school baseball coach, the switch from wood to metal bats began.  Drawn to the old equipment by their nostalgic value, Phil collected and held on to a lot of those wooden ones made locally by the R.G. Johnson Company. You can also find a selection of chairs suspended from the ceiling, dusty books, vintage tools, oil cans, salvaged architectural material and much more.

Speaking of salvaged material…let’s talk about that gym floor we mentioned earlier.

Phil had pulled out an old section of the gym floor from the Thornton Academy High School (where he taught and later retired from). He stored it for years thinking it would have a purpose someday, and it definitely did.

“It’s now our bathroom floor,” boasts Phil. “Pretty proud of the free throw line placement in front of the toilet if I may say so.”

The Academy provided that pick but was also the recipient of Phil’s largesse. Once while on a pick, he found two dump trucks’ worth of beveled glass from a business that went under.  He donated the glass to the school where it was used to build trophy case shelves.

“There’s a certain serendipity that occurs with picking,” explains Phil. “You don’t ask to find anything in particular, things just have a divine way of finding you.” 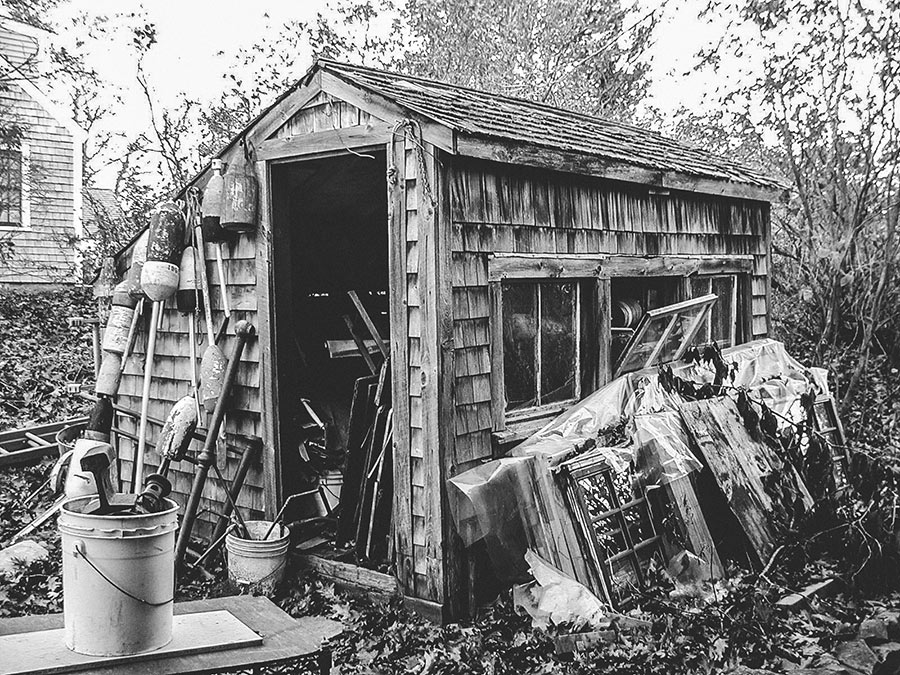 “The main connection I think people have with the song, is the way Dad doesn’t want give up on an object finding a home or helping his community,” says Catie. “There isn’t a single piece on the property that he couldn’t tell you the story of, and he lives to educate others on where everything came from, its use, and how you can use it today.”

Such goes the true mission of the American picker. Who else grew up with a picker parent? Tell us about them in the comments below.

“And that’s the fun of it, it’s that mystery
In all these things bearing other people’s history
You can look at this stuff, wonder where it’s been
You can pick it up and you can use it again”
— Catie Curtis lyrics from Dad’s Yard

Our soft full canvas style hat will be the go-to accessory for any Picker and makes the perfect gift. Featuring our classic Antique Archaeology rooster logo embroidered on the front. SHOP NOW!

18 thoughts on “Dad’s Yard: Growing Up With A Picker”