James and Karla Murray photograph and interview shopkeepers who’ve served their communities for more than century.

If you’ve ever traveled to New York City, chances are you’ve purchased something from a street vendor like a pretzel, hotdog, perhaps a pair of knock-off Ray Bans at a negotiated price. That experience is comparable to the way folks shopped in the early 1800s.

Everything from shoes to smoked fish were sold out of pushcarts rented by immigrant business owners for 10 cents a day. Lined up on neighborhood streets New Yorkers of every nationality were out in the thick crowds conversing, tasting, and bargaining with each other until Mayor Fiorello La Guardia outlawed cart sales mandating that all business go indoors in 1939.

By forcing these businesses into brick and mortar, they’ve been preserved city treasures, made part of family traditions, and remained family owned and operated – many for more than 100 years.

Today, the stories behind those shops are being told thanks to the curiosity of James and Karla Murray – two New York natives whose search for unique city graffiti launched them into a preservation project of historical proportion. With their lenses aimed at small storefronts of century-old businesses, James and Karla have been capturing what remains of old New York for the past 20 years.

Some of these places are thriving more than ever, some are struggling, while others have fallen victim to the challenges of rising costs and corporate competition having to close after decades serving their communities. The personal touch customers get at a family owned business can’t compare to the sterility of a chain store. James and Karla want us to celebrate their history and uniqueness and support their presence even amongst all the new and shiny competition.

What we enjoy the most about these two modern-day preservation activists is that each post on their Instagram account not only includes a captivating photograph full of texture, but also the store’s history in the caption. One of our favorites is McSorley’s bar.

“McSorley’s is one of the oldest bars in the city established in 1854,” says James. “They offer just two types of ale (light or dark). Famous patrons like John Lennon and Abe Lincoln have passed through McSorley’s swinging doors and walked across the sawdust on the floor.”

Up until 1970, it was exclusively serving men. Today, McSorley’s is still selling the same ale and is owned and operated by Teresa Maher, whose father purchased the bar in 1977. A fact that shows progression and evolution with the times while maintaining the core of your business can equate with success!

As if being a small business in a competitive city of commerce isn’t hard enough, enter the sky-high prices of real-estate and taxes in New York City.

“In the early days of  Big Apple business, if you could pay the taxes on the building it was yours,” says Karla. “Now business owners can be charged upwards of $30K per month in rent for a tiny 300 square foot storefront. If the owners of these long-standing shops do not own their building, their business can be in jeopardy. They are at the mercy of their landlords and the ever-increasing rents while still trying to sell a product at a fair price.”

One example of how these changes impacted a particular family and their business is Katy’s Candy Store.

“It was one of the first storefronts we photographed. We really loved its hand-painted signage and the storefront’s overall feel,” says Karla. “In 2007 Katy’s landlord tripled her rent. She was forced to close the business which was her passion, her livelihood and had served the community for more than 40 years. The space that once held her shop is still vacant today.”

Other businesses have successfully established themselves as a staple in the community and even managed to get a role in a major film! (Like Katz Deli did in When Harry Met Sally!)

Jake Dell, third-generation owner of Katz’s Delicatessen has thankfully been able to evolve with the times and keep his family’s business thriving. Founded in 1888 it’s the oldest business in the Lower East Side. He’ll serve you a mile high pastrami with a side of matzo ball soup inside his family’s Jewish deli, but he will also ship you certain house-made specialties anywhere in the world!  This is an example of how the people of New York have valued what Katz’s has to offer over any cookie cutter competition for generations.

With so many places like Katz and McSorley’s to eat in at New York City, how can you help support these historic family-owned businesses? Refrain from chains.

“You can throw a nickel and hit five pizza shops better than anything Dominos can make,” says James. “Why eat from a corporate food franchise when you can have authentic pizza prepared by an Italian using Nonna’s secret sauce recipe? Come to New York with the intention of seeing something new just as so many immigrants did all those years ago.”

Beyond the restaurant and bar scene in the Big Apple, James and Karla want to remind people that when it comes to shopping small in your own neighborhood, it’s easy to forget why it’s so important.  It means knowing where the products we buy comes from, having a relationship with the people behind them, and keeping a family’s legacy alive. It’s maintaining the unique character and colorful personality of our streets, not letting them be lost to modernization and conformity.

“Many store owners felt honored that we would take the time to photograph their business and ask them about its history,” says Karla. “We often sat down with them for hours, talking and reminiscing. We felt welcomed into their ‘homes’ and many refused to let us leave without taking ‘tokens’ of their appreciation such as loaves of bread, pastries, sausages, or pizza. It’s impossible not to walk out of the shop door unchanged.”

James and Karla are doing their part to help spread the word about the small shops of New York City with their three award-winning books all devoted to shining a light on these places. Inside each one, you’ll find the addresses and details necessary to reach out and purchase goods. Or better yet, visit in person!

Our black Two Lanes classic snapback hat features one of Mike’s favorite sayings: “Less People More Life”. Translation – Get out there! Black mesh back with white embroidery and adjustable snap closure. One Size Fits All.  Made in the USA SHOP NOW 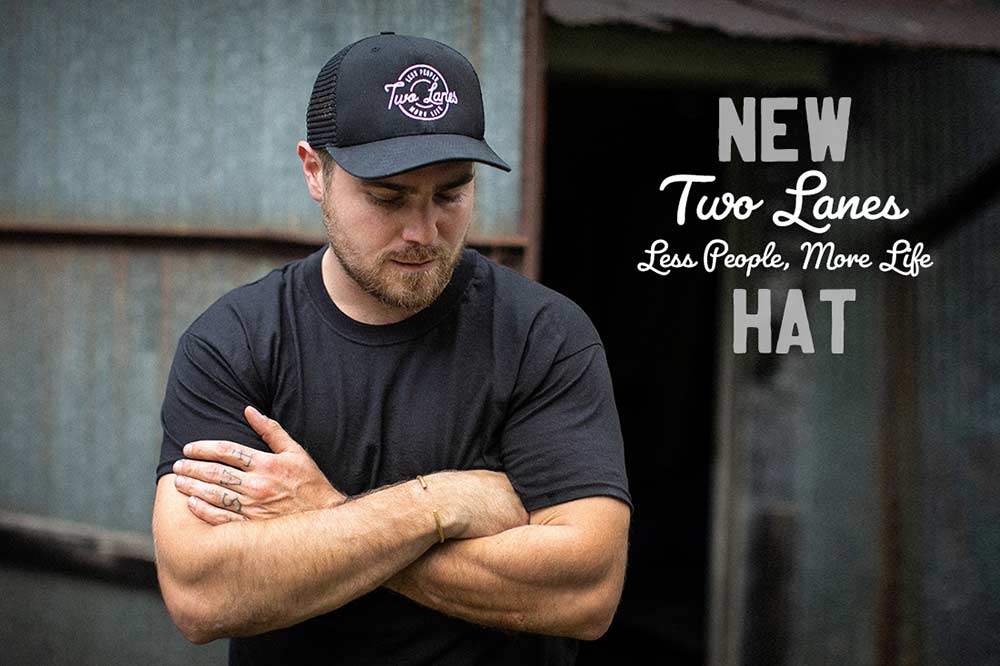