Homer Tate – Curator and Creator of the Macabre

Objects become collectible for so many reasons. Sometimes, it is simply their rarity. Other times, we are drawn to the collecting of things that remind us of a different time or of the inspiring life of those who originally created them. Homer Tate’s oddities fall into all of those categories.

Born in the late 1800’s, Homer Tate was a man that lived a conventional life, holding traditional jobs. He was a miner, a sheriff, a farmer, and eventually the owner of a motel and gas station in Arizona. Maybe it was the people he met and things he saw while running a desert gas station and motel that inspired him to completely change the course of his life.

In 1945, Homer Tate moved to the city of Phoenix and took up the pursuit of art. He didn’t take up the pursuit of traditional art, however, painting or sketching. He became both a curator and creator of oddities of the macabre. Working with papier-mâché and dead animal remains, he created mythical creatures like the Wolf Boy, one of 26 mummies found in a cave in Peru that you may have seen on American Pickers. He eventually opened Tate’s Curiosity Shop to display his many oddities. A flyer promoting the establishment claims the shop contained, “The world’s best manufactured shrunken heads–a wonderful window attraction to make your mother-in-law want to go home.”

Perhaps one of Homer Tate’s most famous curiosities is The THING, the papier-mâché mummy with the mischeivous grin. It was originally purchased by Thomas Binkley Prince and immediately turned into a tourist attraction, advertised by billboards for miles around. It was the kind of thing you probably begged your parents to let you to stop and see while on long driving vacations in the family car. Like many roadside attractions of yesteryear, it was displaced by an interstate. The THING was relocated and has undergone an ownership change, but has continued luring travelers from their paths to see it beneath the glass of its coffin since the mid twentieth century.

Thanks to his decision to spend his life in the pursuit of these oddities and art, we can easily think of Homer Tate as the man who ventured off the path of conventional and then lured the rest of us into following him, if only for a few brief moments while traveling. 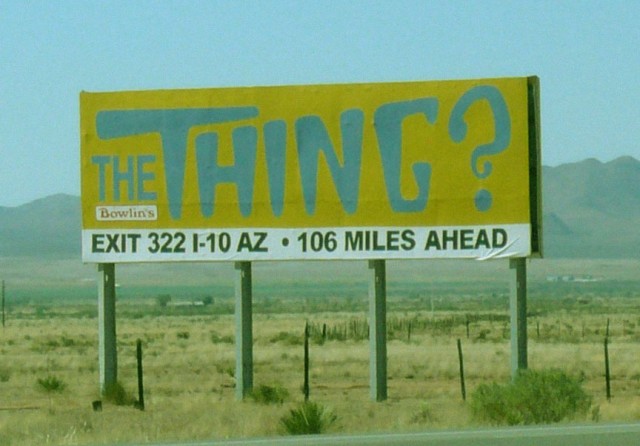