In 2010, the oil and grease were wiped up and the jacks and drill bits were put away as the oldest operating garage east of the Mississippi, Vinsetta Garage, shut its doors after 91years of service. It remained vacant for two years before husband and wife team Curt Catallo and Ann Stevenson added it to their fleet of six restored buildings-turned-restaurants. Just like any true hot rod repair work, its body stayed the same, but its interior received a time-honored upgrade into a garage-themed restaurant under the same name.

“The buildings that interest us are the ones that were built to serve a purpose – like a firehouse, radio station, or church,” says Ann, co-owner and interior decorator to all the Union Joint establishments. “It’s our honor to restore them to serve another purpose, and Vinsetta Garage is no exception.”

When the couple first drove 20 minutes out of the city to check out the boarded-up service garage, they were given a history from the founder’s son and former owner, Mike Kurta Jr., who gave them a history lesson interesting enough to get any car enthusiast’s engine running.

Ann retells the story of how Vinsetta Garage was founded in 1919 by Mike Kurta Sr, a Hungarian immigrant who moved to America, to work in the Ford Factory in Highland Park, Michigan. The young Kurta realized these cars rolling off the country’s first assembly line would eventually need repair work, so he sent himself to mechanic school then opened his garage on the well-traveled Woodward Avenue, which eventually became the first paved road in America.

“Listening to Mike Jr. tell stories about his dad made us fall more in love with the building,” says Ann. “The way he reminisced about his shop days as a kid and watching his dad bounce from car to car with his famous leather tool satchel made it easy to look around the empty space and imagine its potential to once again be filled with family, neighbors, and visitors.”

Seeing the reflective look on Mike Jr.’s face as he unloaded his garage memories, Ann knew exactly how she wanted to honor the space. After all, both her husband and business partner K.C. Crain have a little motor oil in their blood, too.

“My father-in-law created the Deuce Coupe and K.C. is a hot-rod obsessed man,” explained Ann. “So when the opportunity came to restore the garage, we couldn’t pass it up. In a town where ‘the car’ is king – Vinsetta, in its epic heyday as a working garage, was a castle. We set out to keep the garage as purely intact as we could while preserving and honoring the well-worn patina of its Motor City lineage.”

Ann’s Vinsetta vision was to cover every interior inch of the garage with the Kurta’s memories while bringing some contemporary style forward. When you walk in, before you’re seated you’ll be welcomed in the foyer, once the garage manager’s office and still complete with a vintage desk and chairs. Look around you and you’ll find family photos on the walls and old service tickets used as DIY wallpaper in all their grease-marked and pen-scratched glory. When you look up over the pizza oven you’ll see the safety glass from the original skylights repurposed as a floating awning. Corners of the garage are illuminated by locally-made carburetor lights to enhance the automotive theme. Grab a seat at the bar in tufted leather chairs, wide and comfy enough to make you daydream about sitting shotgun in a classic ride. If you can’t picture it, take this video tour with the head chef, Aaron Cozzad.

“Another story Mike Jr. told us was how he and his family lived in the apartment next to the garage, which is now the banquet room,” says Ann. “In fact, the basement below the room is our liquor cellar! It’s amazing that what used to house a family now feeds many families.”

And those families come hungry seven days a week! Cozzad and his team of mechanic shirt-wearing cooks, pay extra special attention to the classic American comfort food they dish up like coal-fired pies, burgers, and pasta with extra special attention. The idea is to serve food that the mechanics would have enjoyed after a shift at the garage. Those hungry mechanics knew good food, so don’t be the fool who passes on the most popular dish, Union Mac&Cheese! The food is so authentic it’s even prepared in the two-car garage behind the building that Mike Jr.’s sister and her husband built for their own use during their garage days.

How does Mike Jr. feel about seeing his family business in its new form?

“We always get the glad hand when we walk in. I thought this place was destined for the wrecking ball until I met Curt and Ann. They were the angels who saved my father’s legacy and the history of our family.”

Vinsetta Garage is open Monday-Sunday on a first-come, first-serve basis. Click here for hours of operation.

Have you ever had a meal at Vinsetta or know of another restored restaurant like it? Tell us about it in the comments below.

These custom Antique Archaeology shop rags are sold in a set of 3. This blue set features a motorcycle service-inspired design printed in white on each rag. Perfect for drying, wiping, and cleaning any and all of your favorite finds. SHOP NOW! 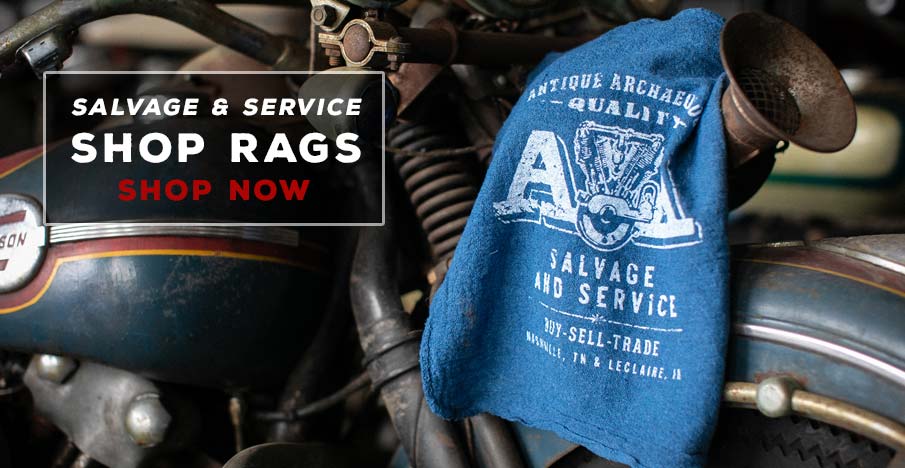 41 thoughts on “Motor City: Dine at One of the Oldest Garages in America”