The “Pics” You Can’t Resist 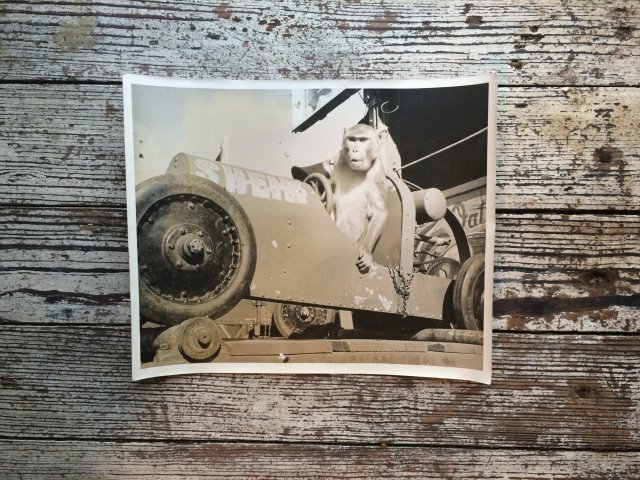 Who doesn’t love to monkey around? In all seriousness, though, you can’t be an American History buff and overlook the importance that early US circuses and carnivals had in our past. The American circus began not long after our country was founded, after all, grew exponentially with the Industrial Revolution, and was often many people’s very first view of new technology, exotic people and animals, and the forms of entertainment that were more readily available in other parts of the world. One of the most popular attractions on the midway at carnivals and circuses? Monkeys – so much so that the “Monkey Speedway” was born in the 1940’s, where monkeys sat in specially designed minature cars that ran on beveled wheels on a roller coaster type gravity track. Some monkeys were actually trained to operate small gasoline engine powered cars, but with monkeys behind the wheel, you can imagine it was as much a demolition derby as a race. Fans loved to see them bump and crash into each other. Funny thing – it’s been said that “The history of the circus is in many ways a microcosm of the history of America”. Could be true, monkeys and all.

Learn more about the history of the circus and it’s importance to America here.

Want to know more about monkeys on the midway? You may want to take a look at Memoirs of a Carny Kid: Monkeys on the Midway.

14 thoughts on “Not My Circus, Not My Monkeys”