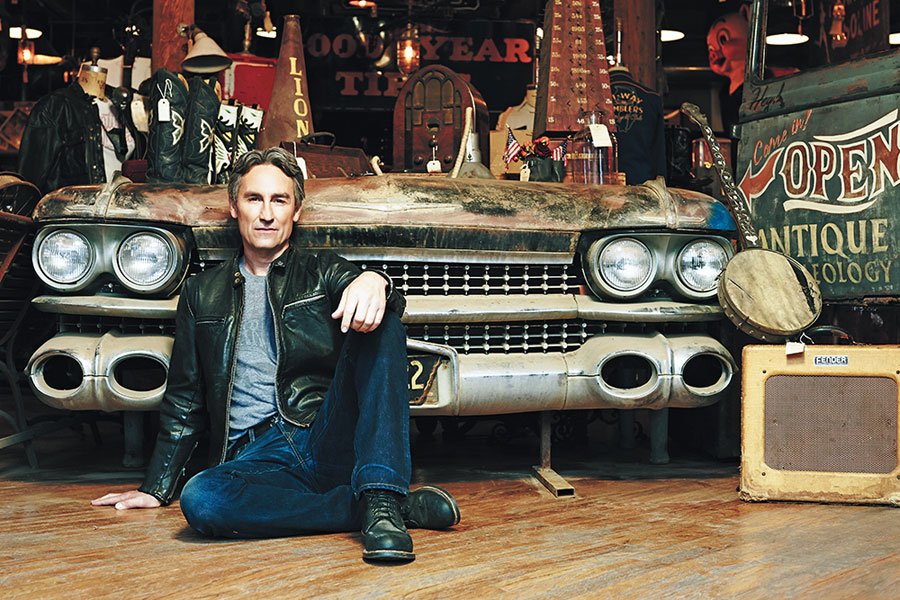 Mike Wolfe in his shop, Antique Archaeology, in Nashville.  Photo by Kristin Barlowe.

The approach shot from Nashville’s trendy West End to Marathon Village is altogether peculiar. The city’s skyline ebbs into and out of view as you pass cranes and buildings and trees. The closer you get, the more your view is obscured by rows of warehouses.

That’s when you start to get a sense of the zoning juggernaut that became the banjo-plucking subtext of Music City’s notoriety. Tree-lined schoolyards butt up to industry; a hospice is across 18th Avenue from a motorcycle shop.

But then you turn onto Clinton Street, and it all makes sense.

The aging, rust-colored brick exterior and the filmy panel windows of the turn-of-the-century building — once a Marathon automobile manufacturing plant — look old, yes, but not in imminent decay. Quite the contrary, actually. The aging hulk is the perfect anchor — with just the right amount of patina — for a section of town teeming with energy and in the midst of a renaissance; with folks young and old converging on a shop made famous on the History channel by a country boy from Iowa.

Mike Wolfe makes an approach shot of his own, from the interior of his shop, Antique Archaeology, to the 18-foot moving truck on Clinton Street that bears the shop’s brand. His clothes resemble his picker’s uniform, which doubles as his business attire. The khaki-colored denim pants and blue denim shirt are common sights on his show, American Pickers. He’s wearing a trucker’s hat pulled low over his eyes, thereby making him somewhat indistinguishable from the throng of workers and shoppers milling about. Then a woman spots him and announces to the horde of tourists who came to Nashville from all over the country, “There he is!”

She and the other 20 people waiting on the sidewalk just happened to get lucky. Wolfe is on the road seven months out of the year, crisscrossing the country looking for vintage goods for American Pickers. This is a rare 9 a.m. appearance on Clinton Street for him. The shop doesn’t even open for another hour.

“Can we take your picture?” one woman asks. “We came all the way from Illinois just to meet you!”

“Oh, yeah?” Wolfe replies, now holding court for the early-morning shoppers. “Well then here, let me get in the picture with you.”

More people arrive and more tourists clamor for a shot with the reality star. He entertains them all. Perhaps he’s the living embodiment of a your-mamma-raised-you-right childhood, or maybe his humility is the byproduct of a memory that still reverts back to when he was sleeping in his van a decade ago while searching for salvaged gold in the barns of America’s back roads. The tourists couldn’t care less. They came to see Mike Wolfe, and here he is.

It is only a five-minute drive through the Gulch neighborhood to 12th Street. Wolfe maneuvers his 1951 candy-apple-red Ford F100 pickup truck through construction convoys and sky-high cranes and speaks as enthusiastically about his new hometown as he does when coming across a vintage Indian motorcycle on American Pickers. “I’ve been all over the country, and I haven’t seen this much growth anywhere,” he says. “The eyes of the world are on Nashville.”

He’s absolutely right. But the humble 50-year-old fails to note that he’s a major reason why Nashville has taken center stage on cable television, and why tour buses make the out-of-the-way Marathon Village neighborhood an attraction for excursions that used to cap the expedition at the Country Music Hall of Fame and the Grand Ole Opry.

“Most people come to Antique Archaeology and they’re not collectors,” he quips as he parks his truck on 12th Street in a spot he just created. His truck is, after all, cool, and it adds to the hip aesthetic around shops like Imogene + Willie custom jeans. (That’s his 1914 Harley-Davidson in the window.) “They come here and they want a piece of the store and the show.”

His show encompasses the dichotomous themes of America: smart growth while preserving our history. That’s why he and his wife, Jodi, moved to Nashville in 2011, just 10 days after the birth of their daughter. Nashville strikes the perfect balance of old meets new. What’s more, there’s a premium on architectural revival, unlike some cities in America that would just as soon knock down an aging eyesore as to save it.

Four years after touching down, he’s as dug in to the city as the planning and zoning commission. In addition to running his shops (the other Antique Archaeology is in Le Claire, Iowa), he also runs a clothing business, does his reality-show filming, has one show that has gone to series at HGTV plus two more pilots, another four in the works and he’s about to be a landlord (again).

Wolfe recently bought the 1882 building on the corner of 14th and Jo Johnson Avenue that was once a neighborhood grocer. The renovation is enormous and tedious, as Wolfe is trying to salvage every vestige of its past before he rents it out as a mixed-use facility. “I’ve always had an interest in old buildings,” he says. “This one tells a great story of the city. It’s also been a dentist office, and an old timer walked by and told me about when there used to be wash basins attached to it that people would use to do their laundry.”

“Hey, mamma, how’s it going?” Wolfe asks of the lady selling bracelets on Broadway in downtown Nashville. “Hey, baby!” she replies. “Good to see you!”

Wolfe is walking to Robert’s Western World for a burger and a beer, having just valeted his truck. Sort of. He pulls up to the gaggle of valets standing around, asks if anyone knows how to drive the thing, and when they all say no, he asks if anyone wants to try. One valet volunteers and instantly floods the engine. Wolfe helps him push it to the side of the street, where it sits and attracts as much attention from tourists as the famous Tootsie’s Orchid Lounge on the corner.

The barroom is barren at noon on Thursday. All the action is next door at Tootsie’s. A couple of locals nurse their Busch Light cans while a lone musician croons from a stage at the entrance. No one acknowledges him when a song begins — or when one ends.

Then Wolfe does. He lets out thunderous applause and shouts — loudly — in between songs. The other patrons follow suit. Instantly, the dynamic changes and people on the street pop in to hear what the commotion is about.

That’s what Mike Wolfe does for a community. For humanity, even. He’s out there picking through long-ago-faded memories with hopes of unearthing the stories they tell.

“I think everyone needs to see small-town America before it disappears,” he says, putting down his burger to weigh his words. “For the show, we go into these towns that are two lanes, and the buildings are falling down because the city can’t afford to keep them up, and the shopkeeps have long since left. I’m trying to figure out a way to help. It breaks my heart.”

He recalls a story from a pick in Arkansas. He was talking to the lone proprietor of the last standing business on Main Street. The man’s eyes welled up as he talked of happier times — of times when Main Street was where you came to shop as well as catch up with your neighbors and chew the fat about town goings-on. He said something to Wolfe that pangs him to this day: Imagine outliving your friends and how hurtful that feels. Now imagine outliving your town.

“Traveling is about moments,” he declares. “Why do we need to know what those moments are before we leave? Get out there. Go explore.” 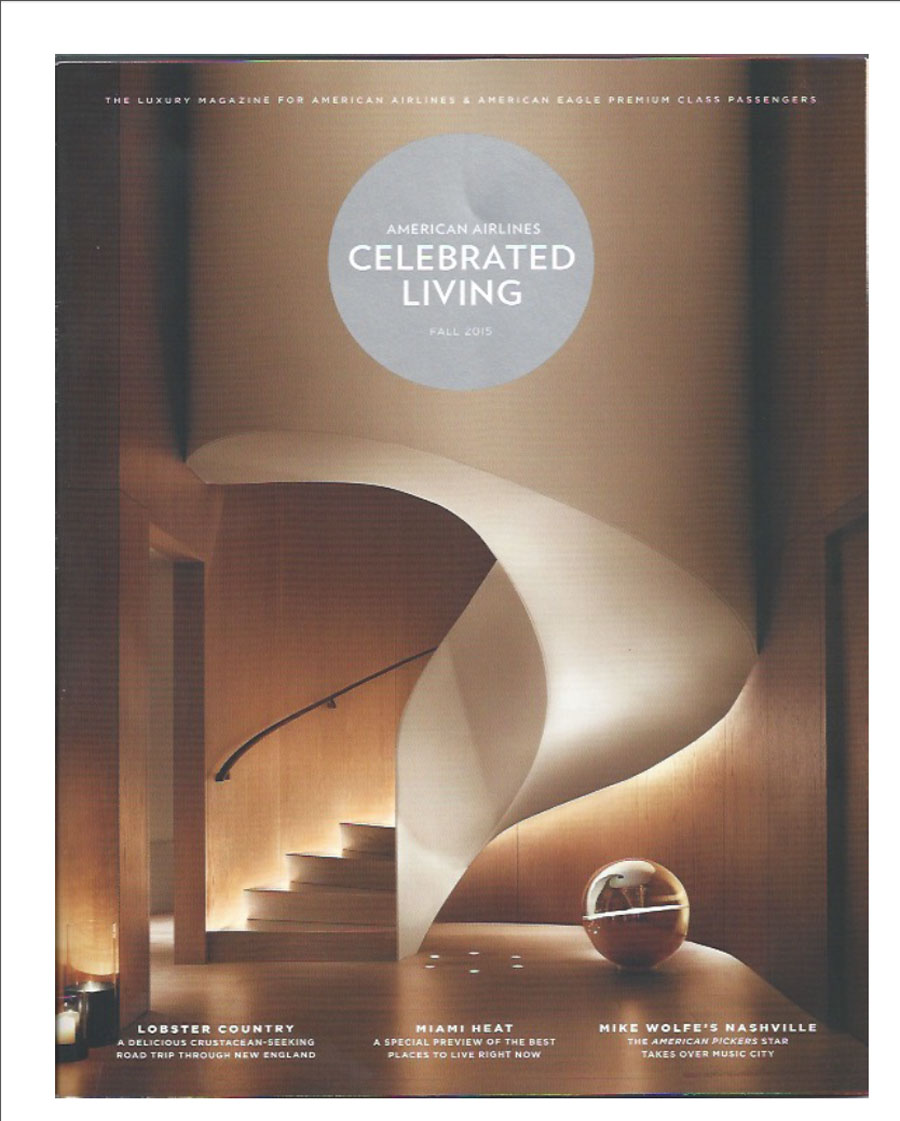 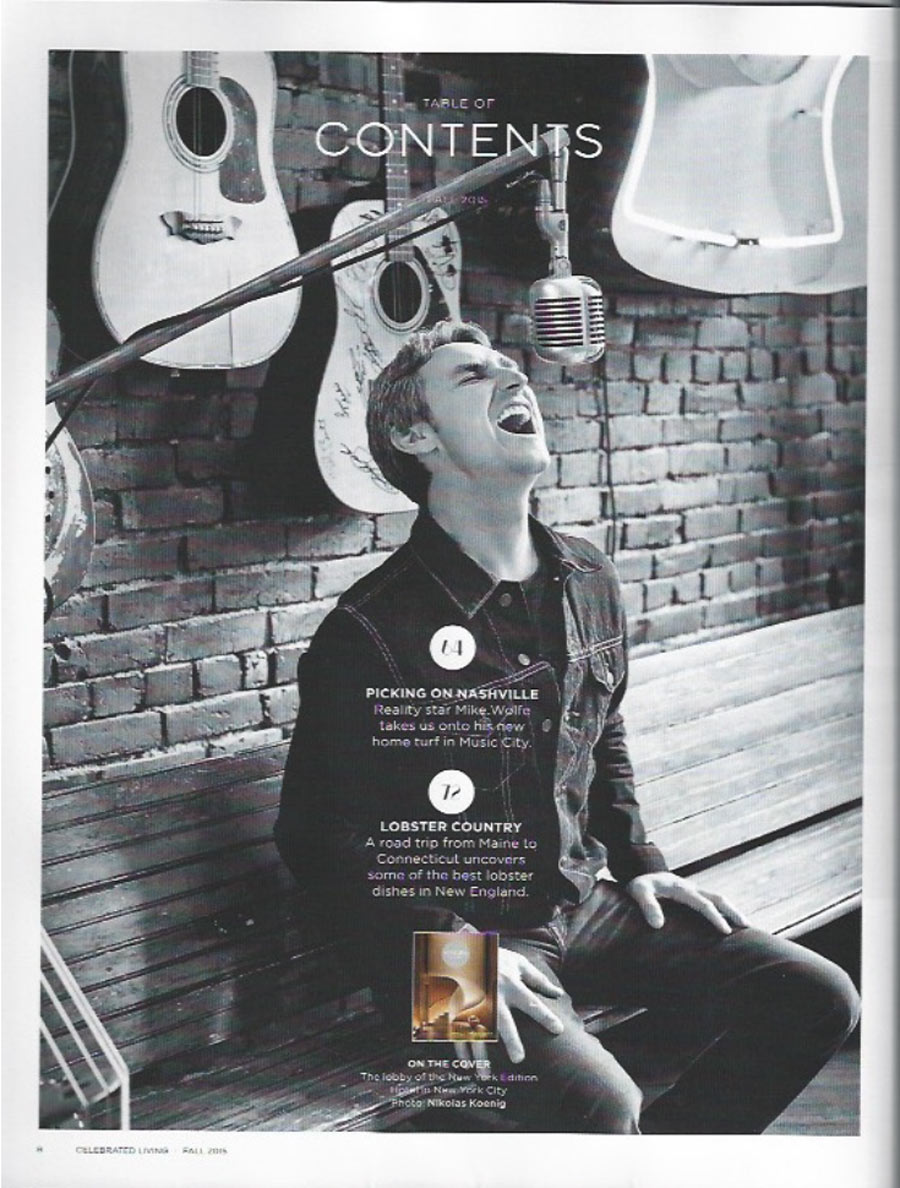 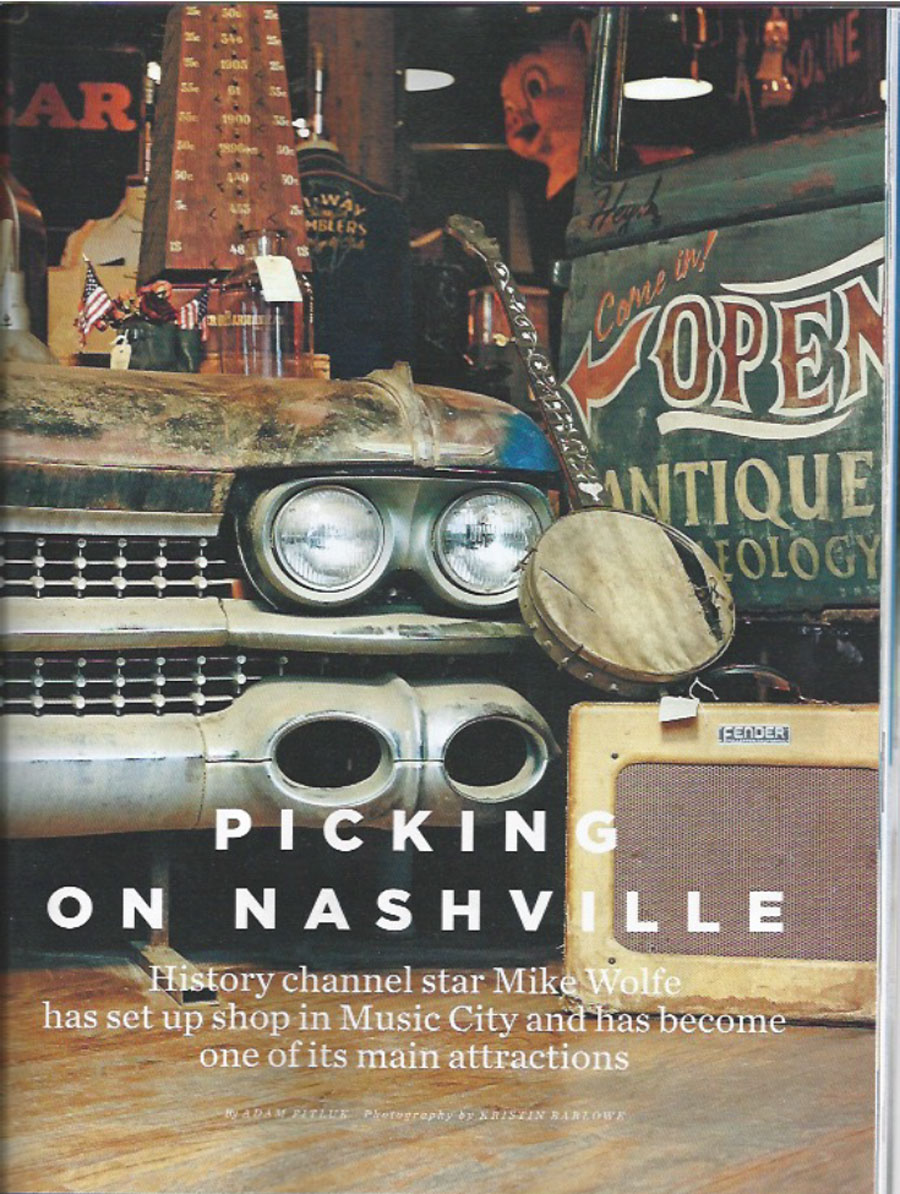 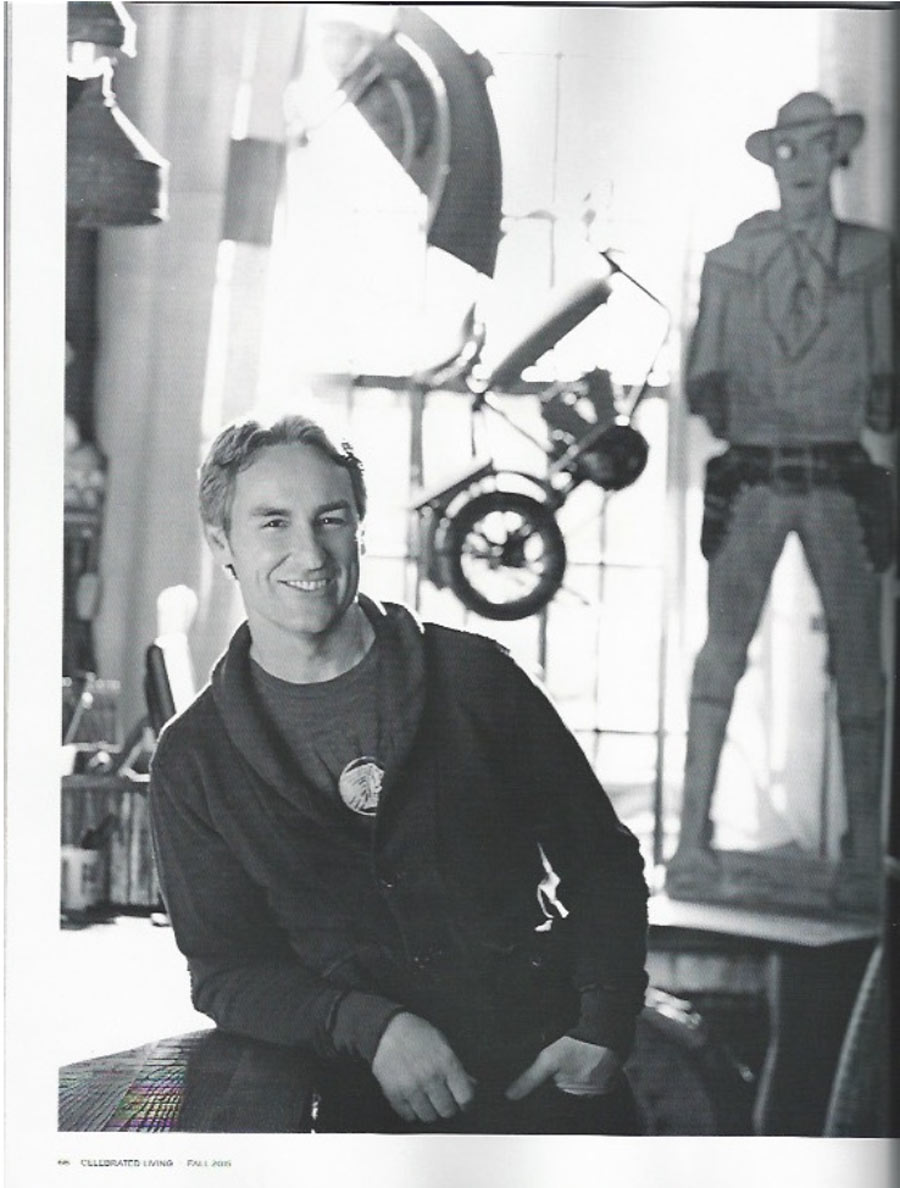 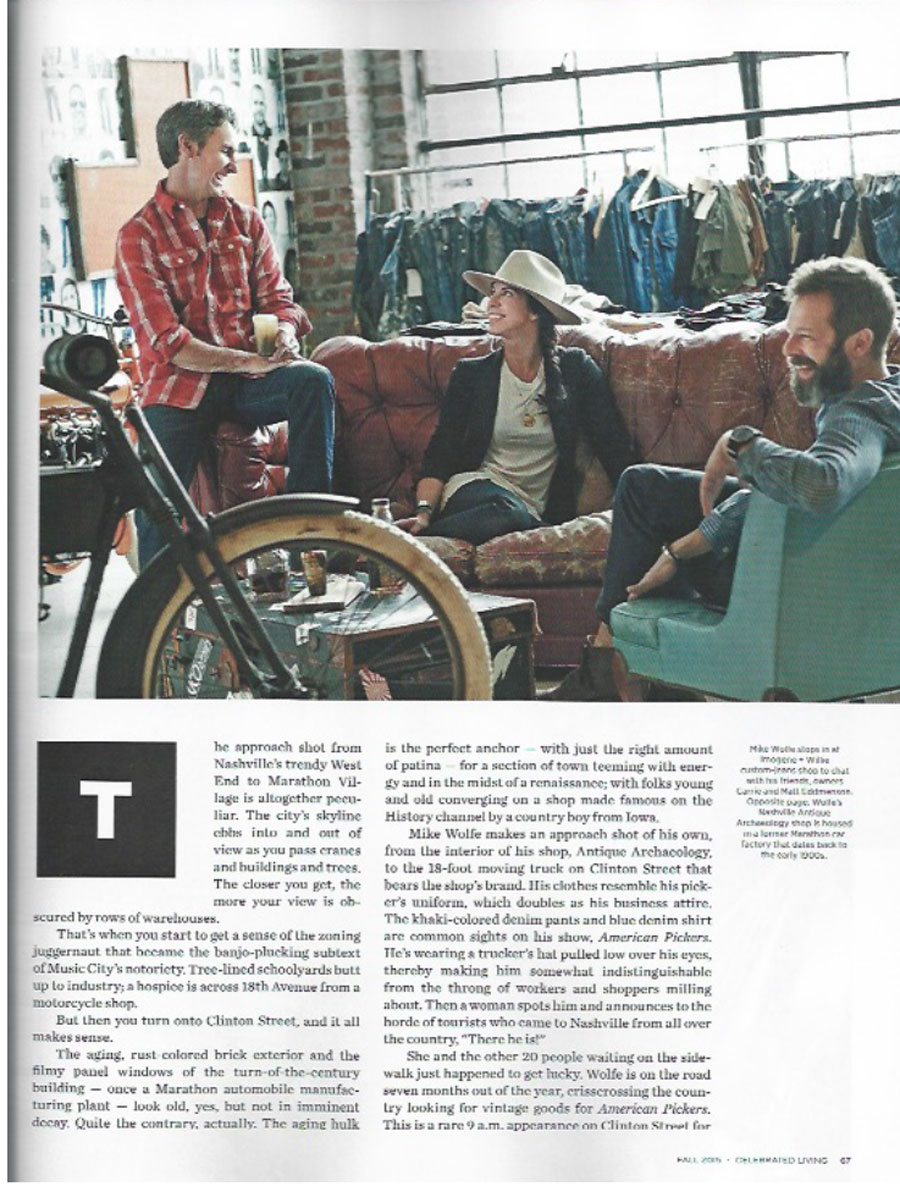 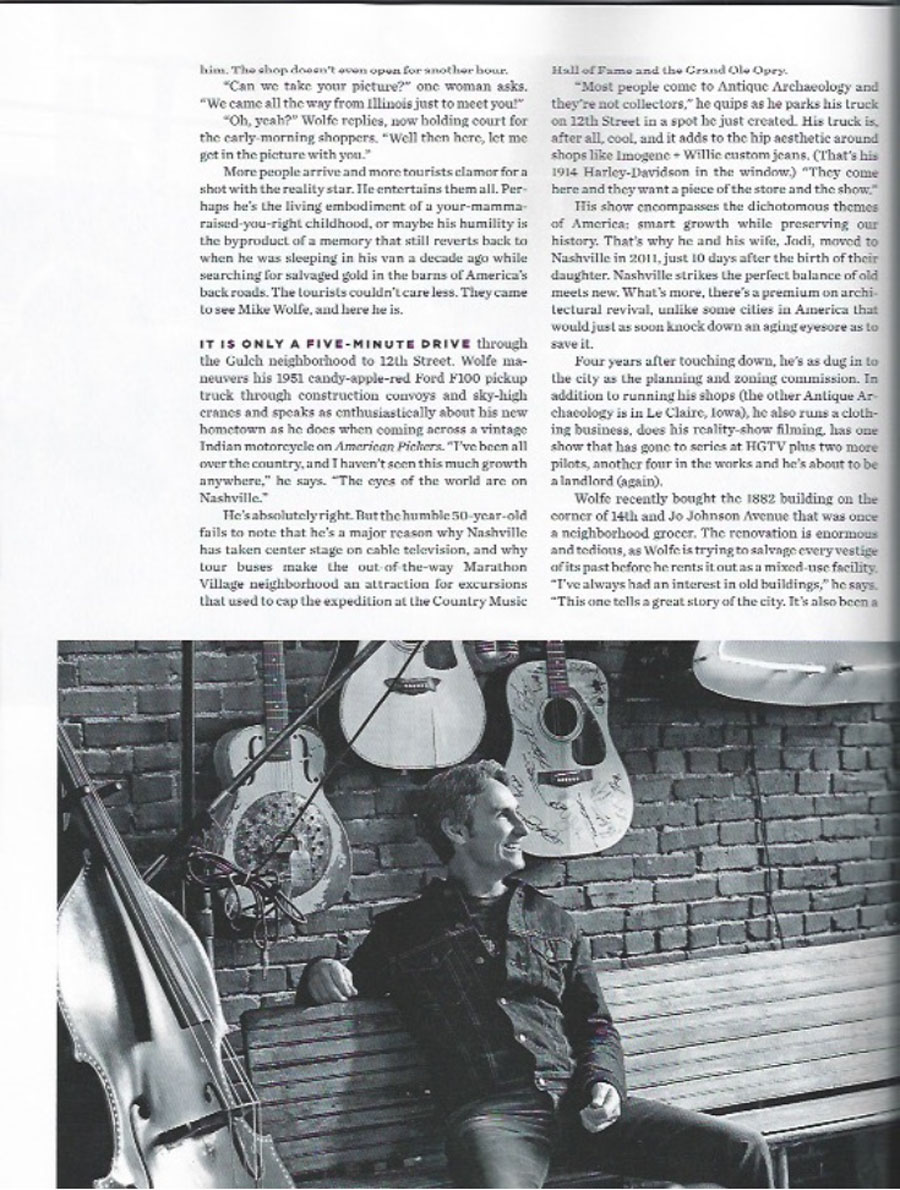 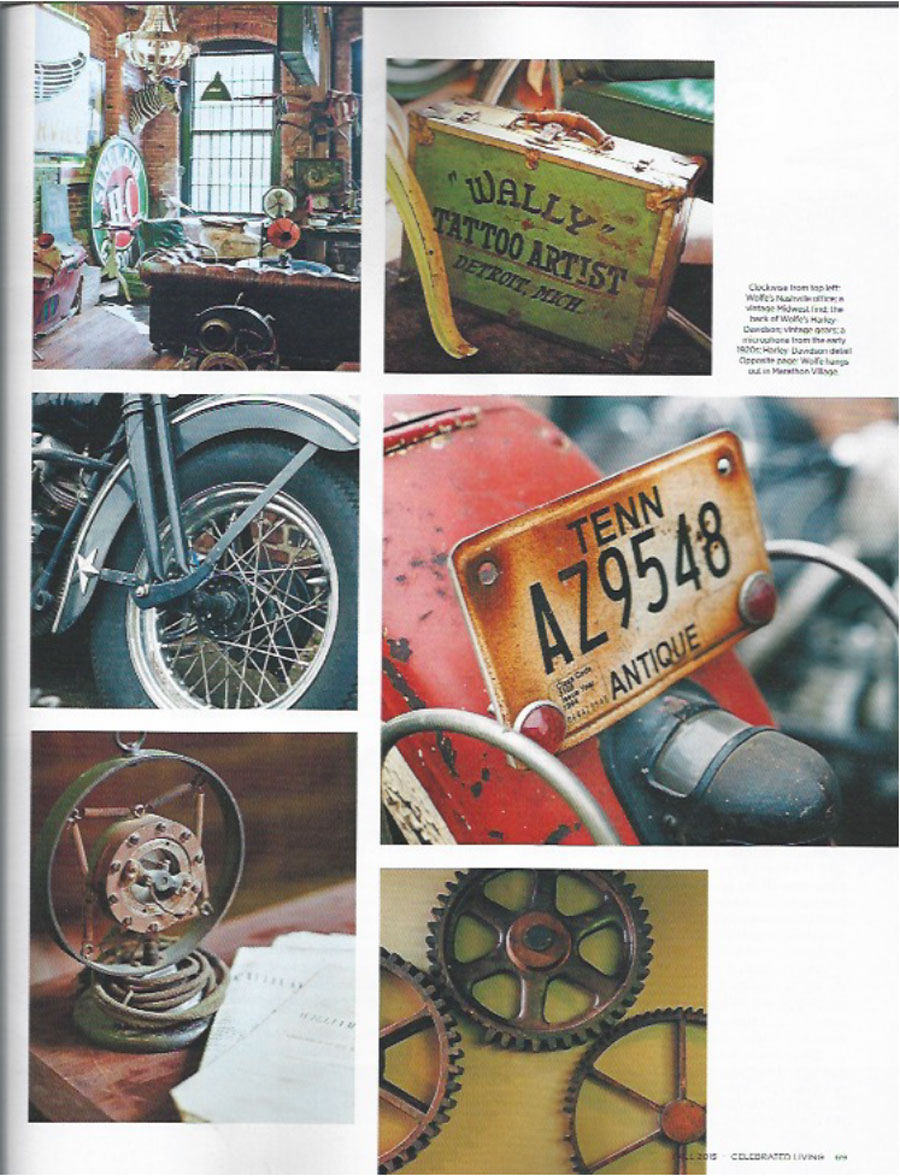 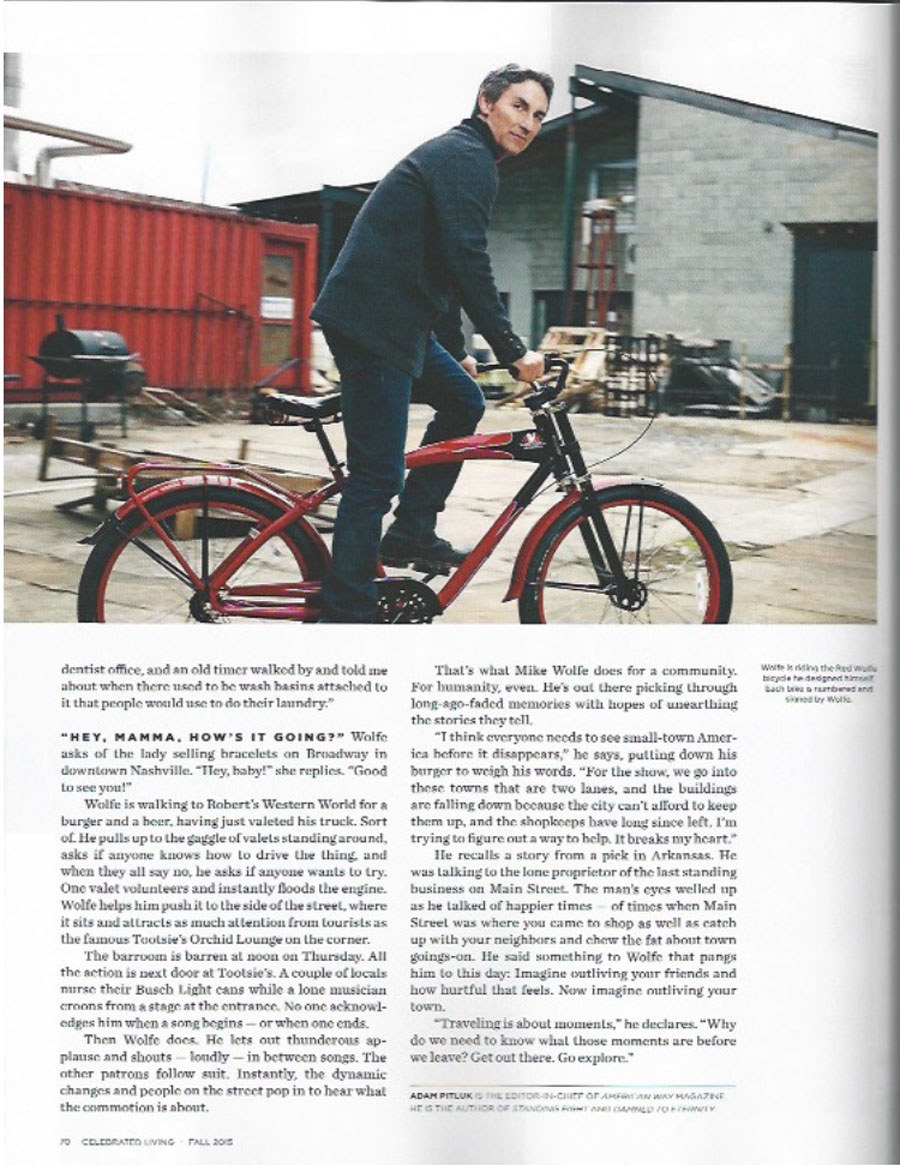