New Englander moves into a music legend’s hunting cabin where she unlocks inspiration to pen her best songs.

Take Hillsboro Road out of Nashville and it will lead you south to Leiper’s Fork, Tennessee, a town of around 500 people that’s protected from the bustle of the big city about 40 minutes away. Tucked away just outside its town lines is an old hunting cabin that once belonged to the 1940s gospel and country music duo, The Louvin Brothers. Ira and Charlie Louvin would retreat to the cabin after touring to hunt and occasionally drop a line in the creek out back. Years later, its wooden walls and surrounding woods are being used as a personal writer’s retreat for local soul-folk musician, Rebecca Correia.

To get to the cabin, you follow a winding road that’s so narrow, you feel like you could reach out and touch the horses at the edge of the fence. More small farms and weathered barns pop up along the way as you follow the babbling creek that runs parallel to the road. When you see the large wooden bridge and a “no trespassing” sign in the yard, you know you’ve arrived. Turn onto the bridge to be escorted up the dirt driveway that meets you at the mossy, railroad tie steps. On a cold January day you’re guaranteed to see smoke sneaking its way out of the stone chimney.

The interior is an experience all its own. Black and white photos of The Louvin Brothers fill the exposed wooden walls, while worn in leather chairs lure you in towards the fireplace.

“I gravitate to the old and the rustic, the soul and the heart of the property.”, says Rebecca. “I love sitting near the waterfall and walking in the woods. It’s neat to know that all my ideas and songs are created beneath the same trees Charlie and Ira spent all those years exploring. It’s hard to not feel moved out here!”

How did Rebecca land such a hideaway? The current owners of the house escape to the beach for about five months each year and invite Rebecca to housesit in their absence.

“It’s been an amazing trade because I divide my time between Tennessee and Massachusetts. While I’m here, the owners get the comfort of knowing their home is being cared for and I get to use the space as a writing retreat for my music. The history locked inside these weathered walls reminds me of the 267-year-old Colonial house I grew up in, in Rochester, MA near Cape Cod.

With heartfelt lyrics and melodies to match, Rebecca pulls you in and paints the picture of the emotion that drives songs. When it’s time to write, Rebecca lights a fire, opens a bottle of white wine and unloads her heart. When she feels like she’s on to something, she walks down the road to an old Shell station where her drummer/co-producer Steve Turner lives to lay it down.

“He has been drumming for Dolly Parton for the past 26 years and is a master at his craft. When you walk inside, you’ll see Steve has converted the space into a home/studio. We’ve recorded most of my latest tracks there. Sometimes I still can’t believe that I get to write songs in the Louvin Brother’s hunting cabin and then record my songs in an old gas station with Dolly Parton’s drummer. This can only happen in Tennessee and that’s why I love the music community here. Everyone is supportive in helping make each other’s dreams come true. Which brings me to the night I met Mike.”

Upon moving to town, Rebecca played a set at Puckett’s in Leiper’s Fork. That same night, Mike and his family walked in for a meal. Her lyric-heavy songs and James Taylor-like soul music moved him to go talk to her after her show. The two swapped stories of small-town childhoods, chasing big dreams, and finding soul happiness in the South.

“Rebecca is an incredible songwriter and good friend,” says Mike. “The girl is an amazing guitarist with lots of groove and feeling. When she played her song, ‘Oh Nashville’ it resonated with me. I travel every two weeks throughout the year for the show. When I’m out on a pick in Illinois and missing home, I can play that song and be immediately taken back to Nashville. It’s a place of comfort and is inspirational to me in so many ways. We decided to collaborate on a music video for the track. We called our friends, I got a few of my vehicles out of the garage, and we ran around the town.”

“We spent the day filming at the cabin and zipping around the back roads of Leiper’s Fork on Mike’s motorcycle with me buckled in the sidecar.” says Rebecca, “Then, he dropped me off at the gas station and our mutual friend Alyssa Bonagura picked me up in his VW Bus. The video perfectly explains my journey and how people stepped in to help me along the way. Each person and place in that video is important to my life.”

“It’s no shocker that the industry is crazy competitive, but I’m not like that. I want to inspire people, lift them up, and share them with the world. That’s the Nashville way and I haven’t experienced anything less. I feel that way about this cabin. The fact that I get to experience this place and feed my dreams while recording relatable music for people is all I could ever ask for. I am forever better because of this cabin and the surrounding community.” 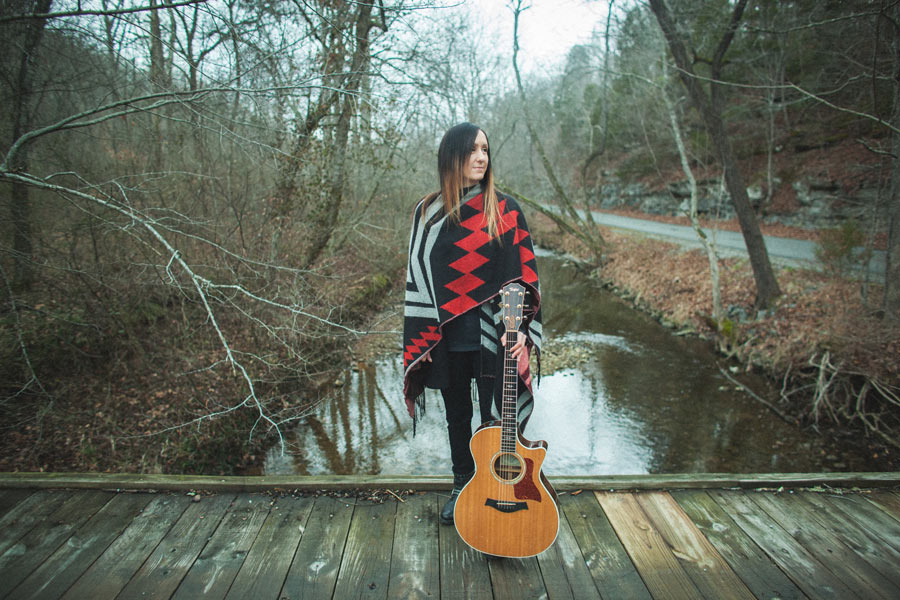 Wanna hear more from Rebecca Correia? Check out her NEW music video for “Solid Ground”  The song is produced by Grammy-winning artist Keb’ Mo,’ is an incredible collaboration of music, lyric and dance inspired by a Boston marathon survivor Adrianne Haslet. 50% of all proceeds benefit the Limbs for Life Foundation. Check it out!

Pick up your new favorite travel essential from Two Lanes! This navy bandana is double washed, extra soft, and American made! 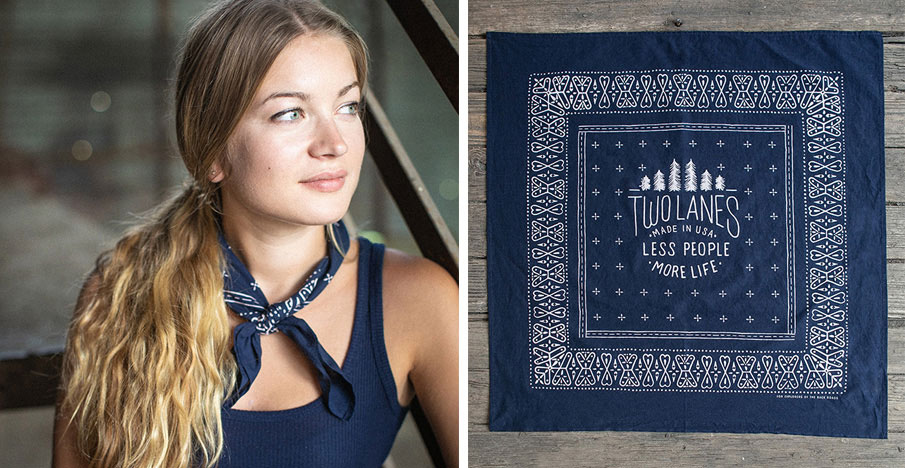 11 thoughts on “Rebecca Correia: Writing in the Woods”