Influenced by his family’s labor in the oilfields of the Texas Panhandle, singer-songwriter Ryan Culwell brings his stories to life.

Mike Wolfe just entered the night shift — the one any experienced Two Lane traveler knows well. It’s the hour when the dashboard clock flips from PM to AM, you’re wishing you were snoring like your friends in the back but it’s your turn in the driver’s seat. He takes some big gulps of his coffee and starts searching for a playlist to occupy his mind over the next few hundred miles.

It’s for moments like this where only a Ryan Culwell song will do for him.

“‘Never Gonna Cry’was the first song of his that I remember playing in the van. Ryan’s lyrics were so powerful and dark,” says Mike “I appreciate how he paints a picture and pulls you in — the true gift of a storyteller. All he needs is three minutes to lead you down a road you’ve never been on to make you feel like you were there. Whenever I listen to Ryan’s music, (my favorite album is Flatlands) I surrender my mind and welcome him in. His voice is the soundtrack to some of the small towns I travel to on American Pickers — being from a little midwestern town I instantly feel a connection to his music.”

Ryan’s youth was spent chasing the sun across the flatlands of Perryton, Texas, a town of fewer than 8,000 people with the nearest entertainment being a mall two hours away. There was nothing to do but to go dig for oil or use your imagination.

My favorite thing to do when I was 12 or 13 was staying out until sunrise to watch the constellations rise and set in a semi-circle over the northern skyline,” says Ryan. “Little moments like that made me feel like I was connected to a world that was bigger than what I knew.”

It was wasn’t all starry skies for Ryan. Being the son of an oilfield worker, he quickly grew up knowing what hard work and dirty hands were capable of. He sings a darkened version of the American dream on his most recent album, The Last American. The title track includes piercing lyrics like, “I’ve got my old man’s heart and a broken down Chevrolet”(Listen below) reflecting on a generation that will never be here again. (Listen below)

“My dad was an incredible example of work ethic, patriotism, and masculinity for me growing up,” says Ryan. “When I turned 19, I went out into the oil field with him, but I only made it three days out there. I moved on to jobs like tree cutting and landscaping which kept my hands dirty and me grounded in my dad’s hardworking roots.”

That influence of hard work and grit fueled Ryan to write his best songs — he wrote his first one at just 9-years-old!

“My lyrics come from a place of reflection and experiences,” says Ryan. “I want to provoke thought, encourage honesty, and show people that no matter where you are in your story, redemption is always in reach.”

His love of music grew stronger each day until the calling finally became so loud that he could no longer ignore it. At 21 he dropped out of college and began writing music full time. A decade later, Ryan moved to Nashville to pen songs with lyrics so deep that they almost take your breath away. (Play “Red River” and you’ll understand)

With musical influences from Bob Dylan, Rodney Crowell, and Bruce Springsteen, Ryan’s lyrics reflect those years of self-discovery and tell his stories with a deep heartland rock sound.

Ryan’s journey is proof that we all need to be open and vulnerable in our lives — especially when traveling. Allowing for the unexpected to happen opens us up for a more fulfilling journey on the road.

“Life on Two Lanes for me has become a game of connect the dots across the nation,” says Ryan, “I’ve opened my heart to strangers and experienced the most life in unlikely places — Like that time I made a pit stop on a country road in West Texas and almost got bit by a rattlesnake while Ray Wylie’s ‘Snake Farm’ blasted from my speakers… That early morning talk with a young boy about his family life in a rural Georgia Waffle House… That wrong turn that led me to the perfect sledding hill in Harrisonburg, Virginia… This country has a lot of charm and treasure, but you have to go looking for it — it’s never gonna come find you.”

Follow @ontwolanes for more of Mike Wolfe’s playlists and back road travel guide across America.

This Two Lanes Driver tee was designed after a 1930s motorcycle magazine picked out of Mike Wolfe’s personal collection. American Made. SHOP NOW! 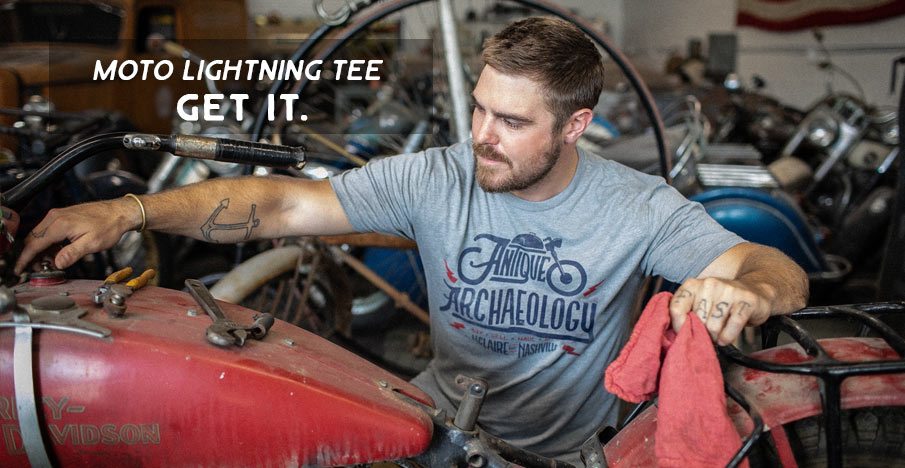 6 thoughts on “Ryan Culwell — The Soundtrack For Your Night Ride”