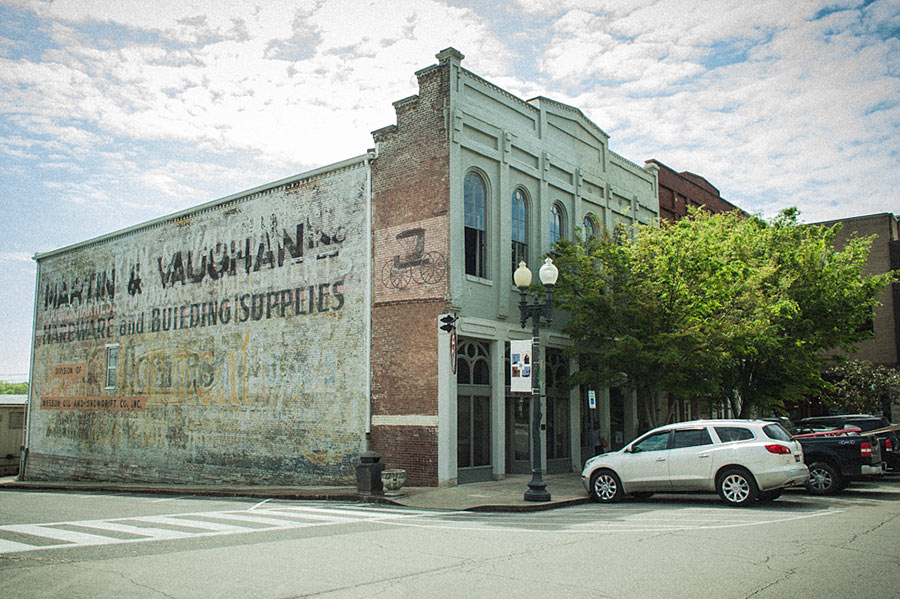 Filming American Pickers keeps Mike pretty busy these days, but it’s collaborating with guys like Timothy and AC that allow him to still share his passion for bicycles and old buildings.

It’s a cold, rainy Tuesday morning in Columbia, Tennessee, about 40 minutes south of Nashville, as three bike shop owners — Mike Wolfe, Timothy Wakefield, and AC Howell — walk into the Trek Bicycle Shop on Main Street in the town square. This isn’t the first time the three have met, but it’s the confluence of three generations and 160 years of bike shop ownership and love.

Columbia, with a population of fewer than 38,000, is a town Mike has long admired for its historic Main Street and preserved buildings, particularly the 1857 brick two-story they’re about to walk into.

It’s a bicycle shop now, but it originally housed different wheels, operating as a wagon and plow business, still advertised by the gigantic faded painting on the huge brick wall outside. In 1973, while working at the local military academy, AC bought the building and opened The Wheel, the first bike shop in Columbia. He ran it as a hobby and side business and over the last 45 years it’s become a community treasure. Now it’s the thread that ties AC to Mike and Timothy.

The first thing to understand is that AC began his bicycle business at a pivotal time in Columbia’s commercial history.

HOW AC STARTED THE WHEEL

“Everyone was leaving the square and taking their businesses to the mall,” says AC. “I was the chairman of the historical zoning commission here in Columbia, so it was my job to maintain the integrity of any downtown restoration projects in order to preserve our local gems. As long as I had something to do with it, I wasn’t going to give up on this building or the community because what existed and still exists here is one-of-a-kind.”

From offering payment plans to customers who needed bikes repaired so they could get to their jobs to hiring local boys in need of work, AC was integral to keeping Columbia moving along on two wheels.

“Many of the boys stayed with me until they went off to college,” says AC. “Now they walk in as dads with their own kids to pick out a bike. Even the head of the Columbia Water Department started working in my shop when he was a young man!”

AC still continued to give back to the community. Each year at Christmas, he would donate 30 or 40 used bikes to the local church group that cleaned them up, put bows on them and delivered them to folks who could use them. His generosity helped provide transportation and enjoyment to people in town who otherwise may never have had a bike.

By 2016, AC was ready to retire but unsure what that would mean for the shop that had become so much a part of the town. It was an opportune moment for Mike — the historian, preservationist, and bike enthusiast — a chance to become part of the active Main Street of the small town he had long admired.

HANDING OFF THE BUSINESS

“One day Mike wandered into the shop and asked me if I was really interested in selling the building,” says AC. “At that point, I wasn’t sure if I wanted to sell or not, but eventually I told him I would sell it on one condition: the bike shop had to stay.”

After kicking the idea around for a year, Mike called AC and the deal was made.

“I had been in the bike business since 1988,” says Mike. “I eventually opened a bike shop in an 1860s building in the historic district of Davenport, Iowa. Even after I closed that shop in 2000, I never lost my passion for bikes. To this day, I can’t walk past a shop without stopping, which is how I met AC. Learning the history of his building and the legacy of his business made me eager to be part of its story.”

Soon after the handshake deal with AC was concluded, Mike got to work on renovations and meeting with Trek bike reps. It was about then that Mike realized his eyes may have been bigger than his stomach.

“I was ready to go waist deep into this, ” explains Mike. “But after laying out all my projects and budgeting my time between LeClaire, Nashville, filming American Pickers, and my family, I quickly realized I couldn’t give the proper attention to the bike shop. During a meeting with a Trek rep, I asked if they knew anyone who’d want to run the shop. It was really important for me to find the right person to take over for AC. That’s when they sent me Tim and his wife from Alabama. He instantly fell in love with Columbia, and I trusted his experience and passion to successfully steer AC’s legacy in the right direction.”

How does AC feel about how everything turned out?

“Timothy knows what’s he’s doing. The only advice I passed on to him when he opened was to be sure to take care of the customers. That was the way I operated and it always served me well.”

As it stands now, AC sold the building to Mike, and the bike business to Timothy. They are now three generations of bicycle passion existing in one historic building.

Timothy and his wife manage three bike shops.  The other two are in Alabama and were both built from scratch. When they became the new owners of The Wheel (now called Trek Bicycle Shop), they were excited about the beautiful historic building that houses their new business.

“My wife is an interior designer so you can picture the glee on her face when we first walked into the large mid-1800s building with tall windows, tin ceilings, and aged wooden floors,” says Timothy.

While their two Alabama shops were busy servicing college students’ bikes as well as the bicycle needs of a city of more than 100,000 people, they were up for the challenge of impressing a small town that grew up with AC.

“This location was special because people had been coming to The Wheel for more than 40 years,” says Tim. “There was certainly a reputation to live up to. I’ve had so many returning customers walk in and share stories with me of how they got their first bike here with AC. We’re looking forward to creating lasting memories like that with the community for years to come.”

Inside the 160-year-old building, Tim is selling state-of-the-art bikes and accessories from Trek, a one-family lineage business out of Wisconsin that makes more bikes in America than any other bike retailer in the country. The family business itself is almost as old as The Wheel!

The town’s reliance on bikes for daily transportation may have altered since the 1970s, but what’s unchanged is the fact that the town’s kids are still learning a trade at the shop. Currently, Timothy has five young people under his wing, learning bike maintenance and customer service.

“A common occurrence is having customers who purchased parts online come in for help installing them,” says Timothy.

“That’s how I met my wife!” interjects Mike. “Jodi came into my shop looking for help installing her pedals!”

“You see?” says Timothy. “Now Mike could’ve shunned her away because she didn’t buy those pedals from him.  You have to embrace it instead, because the end result is to get folks to walk in the door, like your future wife! Proof that you shouldn’t go to bars to meet someone, you should go hangout your local bike shop instead!

Trek Bicycle Shop will work on any bike you bring in because the end goal is to keep people riding them.

“This is more than a retail business, it’s a trade,” explains Mike. “Like a butcher, baker, tailor, people who specialize in what they do, so does a bike shop owner. With any trade nowadays, navigating social media and online sales it can be difficult to capture someones attention. Trek is great shop because you can come over and physically touch a bike you’re interested in. That might sound weird, but imagine everything you buy online that you can’t do that with. This is a major purchase for people. It’s a lifestyle”

Being a small business, Timothy understands the importance small town living. That’s why he actively holds community events to support other small businesses.  Like partnering with Muletown, the local coffee house, for a Coffee Cruise every Saturday. It’s a family-friendly 30-minute bike ride along the riverwalk and that ends with coffee and breakfast at Muletown.

“There are little girls on tricycles, high schoolers on mountain bikes, and their parents. It’s awesome to see a parade of bike-riding onto Main Street and through the square,” explains Timothy.

“We want to let everyone know that it doesn’t matter how nice your bike is, how many miles you ride a day, or even if you haven’t been on a bike since Bush was in office. We just want to help folks get out and ride!” says Timothy.

As a way to serve tourists and even the people who may not be interested in buying a bike, Timothy and his local crew offer rentals at the shop. They’ll hook you up with the proper gear and transport your bikes to the best place in town to ride, the Chickasaw Trace.

HOW TO RENT A BIKE

People come from all over the state to explore the Trace.  What’s better, it’s only a 10-minute ride from the shop.  And there’s no better time to be on two wheels than autumn – with leaves crunching under your tires and brisk air in your face.

Located on 300 acres, the Trace offers 8.5 miles of mountain bike trails suitable for all ages and skill levels. Weave around giant cedar trees and along the Duck River and Knob Creek tributary. Bring the dogs and the family and enjoy a well-deserved picnic along the bank after your ride . . . maybe even a refreshing dip in the river if the spirits moves you.

There are trails to explore and rivers to race in Columbia, Tennessee. Experience it all while holding on to the handlebars of an American made bike from Trek Bicycle Shop.

“Your first sense of independence is on a bicycle. I truly believe that. I see it with my daughter as she learns how her bike is capable of taking her anywhere. That’s your independence, so I don’t think the love of bikes will ever go away completely.” – Mike Wolfe 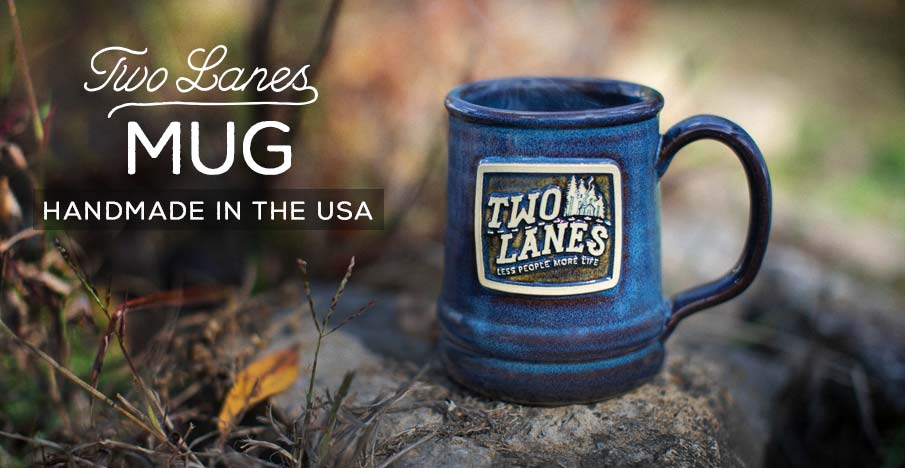 24 thoughts on “Three Generations of Passion — One Historic Building”