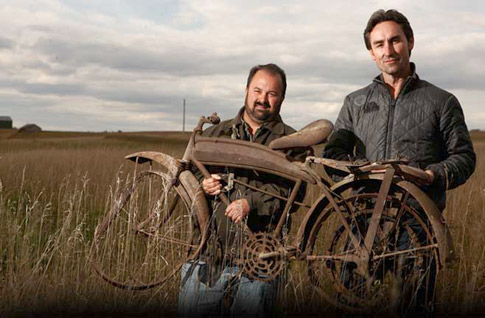 Think of any one-of-a-kind piece of history at an antique shop. Now imagine that same object, forgotten and cobwebbed in some barn or attic. How did it get to the store shelf? Chances are, it was rescued by a picker.

Mike Wolfe and Frank Fritz are inarguably the two most famous pickers in America. Their reality show, “American Pickers,” debuted last year on the History cable station, quickly amassing 3-5 million viewers per episode. Wolfe and Fritz travel the back roads in their trusty van, knocking on doors, interacting with real folks far outside the realm of blow-dried TV glitterati, haggling with them over the worth of everything from rusty bicycles to old signs to jukeboxes. It’s addictive and successful — after a ten-show first season, History renewed “American Pickers” for a whopping 26 episodes.

Wolfe and Fritz, friends since eighth grade, have been scavenging and dealing since childhood, turning their hobby into a career as adults.

“Frank and I would run ads in these small towns, put up flyers, and no one would ever call us,” Wolfe recalled in a recent interview with Toledo Free Press Star. “So we started hitting gravel roads and knocking on doors. ‘Got any old bicycles? Got any old motorcycles?’ It just kinda snowballed from there into a business.”

Wolfe continued, “We’d come across these people with incredible stories, and their connection with the piece. And the way we were finding things was different from what anyone else was doing … READ THE ARTICLE IN ITS ENTIRETY HERE NOW.