We’re getting closer and closer to the lazy, hazy days of summer. Can you feel the warm sun on your face, soft sand on your toes, and distinct smell of SPF 35? Let’s head north to the beaches of the Great Lakes and kick summer off in the right way. Everyone pile in the car and set your sites north to Erie, Pennsylvania.

Erie is a historic lakeside city located in the tip top northwest corner of Pennsylvania. Founded in 1795, Lake Erie is the the most shallow of the Great Lakes and also holds roughly 2,000 sunken ships. When the wind is agreeable, you can catch the large white sails of the famous U.S. Brig Niagara on her way down the channel. The ship is a replica of the relief flagship of Commodore Oliver Hazard Perry during the War of 1812, which gives Erie its “Flagship City” nickname. (When the Niagara is in port, you can tour it and even set sail!) Lake Erie was a railroad hub during America’s westward expansion, and the city even won the All-America City Award in 1972.

Erie was an important transportation hub in the rum-running of liquor across the lake from Canada during the Prohibition. It’s even said that the speedboat was invented on the Erie docks during that time. Bootleggers would boat to Canada, collect the liquor, and then disperse throughout the city to be hidden in bookcases and basements. It wouldn’t be long before speakeasies were created and Erie became a wet city. When you walk down to Dobbins Landing, you’ll find the restaurants bear names like Smuggler’s Wharf, Rum Runners, and The Cove hinting at Erie’s boozy past. For extra reading, learn more about Erie’s history and heritage throughout the years. 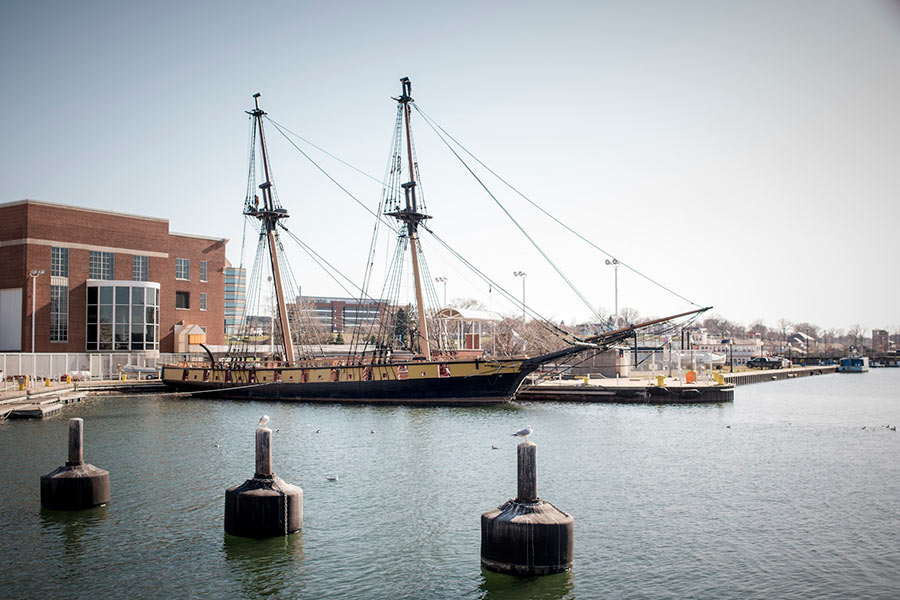 Whether your accommodation preferences are room/turn down services, camping, or bed and breakfast, Erie has you covered. If you’re wanting more of an outdoor experience, check out the camping options at Lakeview as they offer full-service lakefront rentals, mini-cottages, motel rooms, and suites. Check out their Airstream rental options, too!

Built in 1876, the Spencer House Bed and Breakfast was originally intended to be a wedding present for newlyweds William Spencer and his bride, until the bride got cold feet. Located in downtown, and minutes from the beach, the staff will be sure to keep your toes warm with comfortable accommodations in this Victorian-style home. Did we mention the house special is cinnamon chip pancakes? Good morning, indeed.

If you’d like to wake up in a lighthouse, in Lake Erie wine country, then check out Light on the Lake. Relax on the beach and walk over to the CrayZ Parrot for a bite. It’s about a half-hour drive from downtown, but worth it for your day after exploring the vineyards!

Jekyll & Hydes have a light and dark side just like the story. You’ll find more than 46 beers on tap, and full flavor dishes like Devils on Horseback. The chef is serious about dessert here. If you see cheesecake on the menu, order it! Flavors often include balsamic, fireball, or coconut curry. Tabletop smores are not to be missed either.

The contemporary Asian/fusion dishes at 1201 Kitchen are a work of art. The chef insists on serving dishes with only the finest produce sourced from farmers and fishermen. Try the shio ramen and specialty cocktails. If you’re feeling extra high class after your meal, walk down the street to take in a performance at the 85-year-old, French Renaissance-style Warner Theartre. (It was commissioned by the world-famous Warner Bros.!)

If you want to grab quick some treats and local cider, make a pit stop at Fuhrmans. They make fresh cider on 100-year-old presses using apples from a variety of 14 different Erie country apple farms and make some of the best-baked goods in town. When you’re down by the lake, indulge in some of Romolo’s famous sponge candy!

If you’re feeling hungry while you’re on the peninsula, the only/best option is Sara’s. This 1950s inspired diner is serving up homemade onion rings, charcoaled burgers, orange sherbet twist cones, and local Smith’s hot dogs. Walk up to the counter, which just happens to be an old Ford Victoria car, to order your grub and enjoy it beneath a red and white umbrella. Located at the gateway of Presque Isle, this is a must for anyone going to and from the peninsula. Speaking of which, time to talk about the beaches.

Presque Isle State Park, a peninsula stretching more than 3,000 acres across Lake Erie, is home to one of  USA TODAY’s best freshwater beaches in America. The park welcomes more than 4 million visitors each year to its 7 miles of beaches, 13.5 miles of multipurpose trails, and historic lighthouses. The Presque Isle lighthouse, in particular, was built in 1872 and is still used by the US Coast Guard today. The lighthouse is on the National Register of Historic Places and available to tour. If you want something a bit more active, rent a tandem bike from The Yellow Bike Rental Co. and hit the trails. You’ll find locals fishing, kayaking, biking, sunbathing, and picnicking throughout the park so jump on in with the rest of them! Do not miss the sunset. Repeat: Do NOT miss the sunset.

Looking for some thrills? There’s a modest theme park, Waldameer, that you’d be foolish to miss. Waldameer Park is the 10th oldest amusement park in the United States. Originally a popular picnic grove overlooking the lake, the theme park/water world combo has been entertaining families since 1896 with more than 70 rides, slides, and attractions. Don’t miss the classic wooden roller coasters, (The Comet is the oldest ride in the park; a wooden roller coaster from 1951.), elephant ears, (think funnel cake but BIGGER), and especially the Ferris wheel, which sits at the edge of the park. Locals like to ask the operator to stop them at the top for the amazing view of Presque Isle’s beaches at sunset. Combining historic charm with modern entertainment, Waldameer will not disappoint.

If you plan your getaway appropriately, you can watch 165,000 motorcycle riders come into town for a yearly charity ride called Roar on the Shore. They travel from each corner of the country to participate in a five-day rally to raise money for charity.  You can catch the celebrity grand marshal leading the bikers in one of the largest bike parades in the country.

While you are downtown checking out the chrome, make sure you travel down Peach Street to the bright lights of the Bicentennial Tower. Built to commemorate the city’s bicentennial year in 1996, the tower stands 187 feet tall and gives you a panoramic view of the city. Locals say on a clear day, and with some rather strong binoculars, you can see Canada. We dare you to see if it’s true!

Any serious wine drinker is going to want to put the Lake Erie Wine Trail at the top of their list. Pace yourself for the more than 20 wineries spanning 220 miles from Ohio, Pennsylvania, and New York. Select your route and stretch your legs because you’ll be covering 42,000 acres of vineyards producing award-winning wine.

If you can’t make it to the wine trail, Cloud 9 downtown offers a range of apps and local pours of beer and wine. The restaurant is only one of three in the state to offer draft wine, so make sure you try a glass!

If you enjoy drinking in a legendary location, make it a point to go downtown to The Brewerie. This beer pub and restaurant is located in Erie’s historic train station, Union Station. This place was built in 1927, is still operational, and has welcomed many famous people from President Lincoln, President Franklin D. Roosevelt, and Babe Ruth just to name a few. Below Union Station is an old bomb shelter and a tunnel that goes under 14th Street which was used to transfer mail from the station to the Erie Post Office. A second tunnel runs 14 blocks north towards the bay and was used for access to the waterfront.

Our bags are packed, sunscreen is in tow, and we’re ready to get on that Ferris wheel. Let us know what else you’d like to try in Erie or where you’d like us to travel on our next weekend escape!

Our soft full canvas style hat will be the go-to accessory for any Picker and makes the perfect gift. Featuring our classic Antique Archaeology rooster logo embroidered on the front, adjustable back closure. SHOP NOW